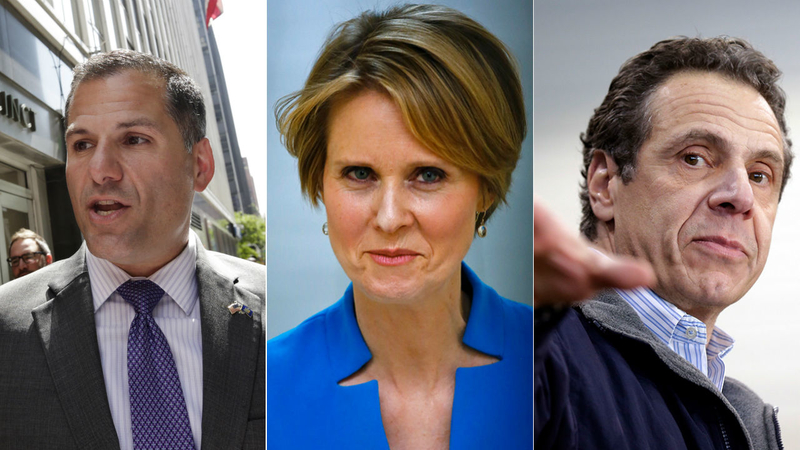 NEW YORK (WABC) -- It could be a move to help Cynthia Nixon in her primary fight with Andrew Cuomo, but on Monday, Republican nominee Marc Molinaro stepped up his attacks on Cuomo by launching a new TV ad and blasting the Cuomo Administration as corrupt.

But another line in the ad has angered the Cuomo campaign. The ad claims "he (Cuomo) is under investigation again in another pay to play scam."

Responding in a cease and desist letter, Cuomo campaign manager Maggie Moran wrote, "that statement (about another investigation) is demonstrably false."

Despite the convictions of several associates and other Albany politicians, Cuomo has never been charged with any crime.

Molinaro ignored demands by the Cuomo command to pull the TV ad. At a news conference Monday on the steps of City Hall, Molinaro said "he (Cuomo) has benefited from, he has encouraged, he has emboldened and he has enabled a culture of corruption that has benefited him politically."

Cuomo was not on the campaign trail and has basically ignored Molinaro and his primary opponent, Cynthia Nixon. That primary election is now less than a month away on Thursday, Sept. 13.

Instead of responding to his statewide opponents, the governor has focused on President Trump.

Over the weekend, Cuomo began a new attack on Trump calling him un-American. He told one church crowd in Brooklyn on Sunday, "I believe it is un-American for this President to be spreading division among us when it was his job to bring unity to all of us."

Nixon has responded to Cuomo's blistering attack on Trump by accusing Cuomo of being at first reluctant to criticize Trump. In an online video Monday, Nixon said Cuomo, "did some polling and then his attacks began."

Nixon went on, "New York needs a Governor who doesn't need $300,000 worth of polling to tell her that opposing Donald Trump is the right thing to do."