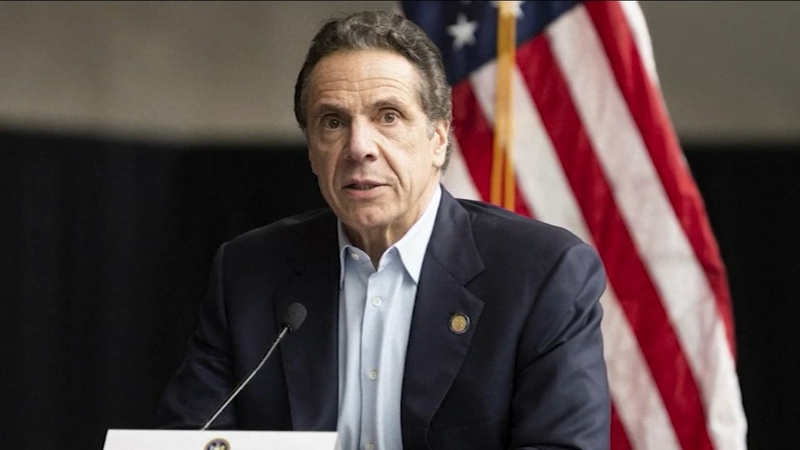 In an exclusive interview with ABC News' George Stephanopoulos on Tuesday, President Biden said that Cuomo should resign if an investigation confirms claims he committed sexual harassment.

"The president said there should be a review," Cuomo said. "I agree with him on that, the people of New York agree with him on that, people of New York in the Siena poll said, 50% to 35%, or something like that, that i should not resign. 35% said I should resign. By the way 35% would say i should resign anyway. There has always been 35% against me, on the normal political spectrum. So President Biden's position is consistent with New Yorkers position, consistent with the siena poll position, consistent with my position.

Cuomo reiterated he is not going to resign.
EMBED More News Videos

The New York governor answered a question about President Biden saying he should resign if allegations are true.

"Find out the facts, and we will take it from there," he said.

"If you committed a crime, you can be prosecuted, that's true, but what President Biden said was, we should do an investigation," Cuomo said. "The question to President Biden starts with, 'Do you think the governor should resign or do you think should there a review first?' And the president said, 'There should be a review.'"

Speaker of the New York State Assembly Carl Heastie said he and Chairman Charles Lavine announced on Wednesday morning, the hiring of the law firm that will assist the Assembly Judiciary Committee in the impeachment investigation of Governor Andrew Cuomo.

Wednesday morning Chairman @CharlesLavineNY and I will be announcing the hiring of a law firm to assist the Assembly Judiciary Committee in the impeachment investigation of Governor Cuomo. As I have said, we intend to have an expeditious and thorough investigation.

Candace McCowan reports on the sexual harassment scandal from the East Side.

"Since Thursday, Chairman Lavine led a vigorous search for a top-flight firm to assist with the investigation. I have the utmost faith that Assemblymember Lavine and our Judiciary Committee will conduct a full and fair investigation," Speaker Heastie said. "Hiring Davis Polk will give the Committee the experience, independence and resources needed to handle this important investigation in a thorough and expeditious manner."

"The addition of Davis Polk will allow my colleagues on the Judiciary Committee and me to fully and fairly investigate the allegations," Assemblymember Lavine said. "These are serious allegations, and they will be treated with fairness, due process and discretion."

The hiring did not come without controversy from one of the accusers.

The attorney for Cuomo accuser Charlotte Bennett said the assembly's hiring is alarming because of the firm's connections to the governor.

Debra Katz said in a statement: "Attorney General Letitia James made very impressive hires in Joon Kim and Ann Clark, two attorneys with a wealth of experience and independence. This, of course, is critical to ensure that victims and witnesses, including current employees, feel comfortable coming forward. Political independence is fundamental to the integrity of the investigation. We were alarmed to learn that Speaker Heastie has hired Davis Polk to assist with the investigation, given the connection between Dennis Glazer, who spent more than 30 years as a partner at Davis Polk, and the Governor. This is an unacceptable conflict of interest. The impeachment investigation must operate free of political influence and must be transparent, detailing for the public the steps being taken to protect the integrity of their impeachment investigation. We already know the extent to which Governor Cuomo has surrounded himself with people in the Executive Chamber who enabled his behavior and swept evidence of sexual harassment under the rug. If there is even a hint of political influence in the impeachment investigation, it will taint the entire proceedings. While Ms. Bennett is committed to cooperating with all appropriate governmental inquiries, including the impeachment investigation, the involvement of Davis Polk gives her pause. I suspect it will have the same effect on other women who were sexually harassed by the governor."

Also, one of Andrew Cuomo's accusers appeared on a radio show to talk about her allegations against the embattled governor.
EMBED More News Videos

One of Andrew Cuomo's accusers appeared on a radio show to talk about her accusations against the governor.

Former aide Karen Hinton spoke out on WNYC radio, saying Cuomo was "aroused" when he hugged her.

"He approached me and embraced me too tightly, too long, and was aroused," she said. "And I felt extremely uncomfortable and actually shocked by it."

U.S. Senate Majority Leader Charles Schumer repeated his call Tuesday for the governor to step down, saying Cuomo has lost the confidence of his governing partners.

Also, state Senate Majority Leader Andrea Stewart-Cousins reiterated her stance that Governor Cuomo should resign, but she said she would continue to work with him in the meantime.

"The governor is well-known for being who he is, and making sure that you know exactly what he feels," she said. "So this Andrew Cuomo is certainly somebody who I have met. But as I said, I don't get bullied."

Another former aide met with investigators Monday to discuss her accusations of sexual harassment.

Former aide Charlotte Bennett met with investigators via Zoom for more than four hours, with her attorney, Debra Katz, releasing the following statement after the questioning.

"She detailed her allegations of sexual harassment and provided the investigators with more than 120 pages of contemporaneous records, as well as other examples of documentary evidence, to corroborate her accusations against Gov. Cuomo and his senior staff," Katz said.

She says the investigators have been moving quickly -- and with sensitivity -- to get to the heart of the allegations.

"We remain confident that their investigation will substantiate Charlotte's claims of sexual harassment against Gov. Cuomo, as well as the failure of his senior staff to meet their mandatory reporting requirements under the very laws he signed," Katz said. "She also provided detailed information about the sexually hostile work environment the Governor fostered in both his Manhattan and Albany offices and his deliberate effort to create rivalries and tension among female staffers on whom he bestowed attention. One piece of new information that came to light today was the Governor's preoccupation with his hand size and what the large size of his hands indicated to Charlotte and other members of his staff. As we have said before, it is imperative that this investigation not only focus on Gov. Cuomo's actions, but also on the culture of fear, abuse and secrecy that he and his most senior staff cultivated. To that end, we have full confidence in the investigation and the investigators. We urge others who have been subjected to inappropriate conduct by the Governor - and we know you are out there - to come forward with what you experienced. And to those who observed the behavior, we urge you to do the same."

Seven women have accused the governor of some form of sexual harassment or inappropriate touching.

Late Monday, Jill Basinger, the attorney for Lindsey Boylan, another one of Cuomo's accusers, released a statement saying that she met with investigators last weekend.

"Ms. Boylan was interviewed last weekend by investigators assigned by the Attorney General's office," it read. "It is clear from the interview that the investigators are moving expeditiously and taking their work seriously. We are pleased with the scope of the investigation and the thoughtfulness and thoroughness of their questioning."