7 On Your Side: Woman loses life savings in Apple Support impostor scam 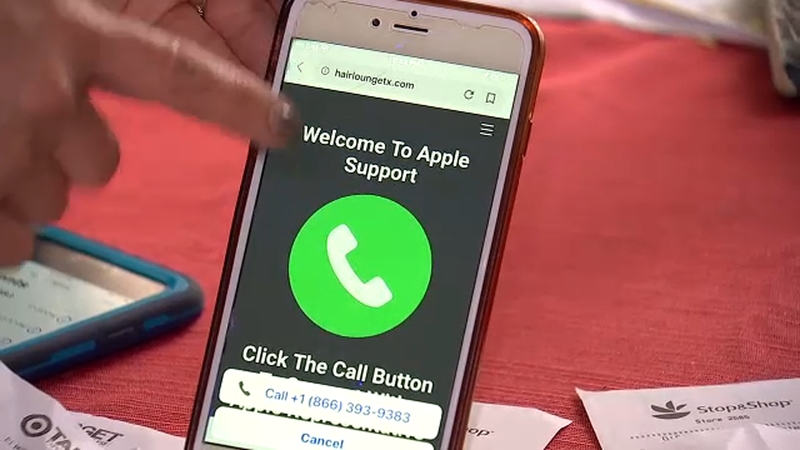 NEW YORK (WABC) -- Impostor scams are now the number one complaint being reported to the Federal Trade Commission.

Last year, consumers lost more than $667 million to scammers who pretended to be everyone from the IRS to the police to even family members.

The average victim loses about $700, but one Nassau County woman lost a lot more.

7 On Your Side wanted to talk to one of these con artists who stole thousands from a hard-working single mom simply trying to surprise her son with a new iPhone.

"You're a scam an artist, you're running a scam," 7 On Your Side told the impostor. "You're taking advantage of this mom. This is is not Apple."

The man on other end of the phone is an impostor masquerading as an Apple support person.

Chinyere Ogbonna says she lost $6,000 to a counterfeit Apple support person, just like him.

It began when she got an empty box instead of the new iPhone she ordered. She Googled "Apple Support" on her phone, called the first number and was told in order to be refunded the $1,500 to her credit card, she had to first buy gift cards and share the codes.

"This is my whole life savings I gave to them," Ogbonna said.

Her mistake? After googling Apple support on her phone, a few numbers popped up. By clicking on certain ones, an impostor shows up.

7 On Your Side called another number which popped up as "Apple Support," but the website was masked as "Hair lounge."

That's a clue to the con that Ogbonna didn't see.

When 7 On Your Side called the number, the scammer tried to get us to install an app and screen-share banking information.

His story was he needed that information to "process a refund." 7 On Your Side never gave it to him.

The big takeaway: Be very careful when you're looking for phone numbers online, go directly to the number on your bill or the legitimate website.

Never click on a link or call a number emailed or texted to you. And never pay with gift cards. Once that money is gone, it's gone.

In this case, Apple did send out another phone, free of charge.

Email 7OnYourSideNina@abc.com, or contact Nina on her Facebook page or tweet her at Twitter @7OnYourSideNY! You can also call the 7 On Your Side Hotline at 917-260-7697 or fill out the form below.
Report a correction or typo
Related topics:
personal financenassau countyapple7 on your sidescam
Copyright © 2021 WABC-TV. All Rights Reserved.
7 ON YOUR SIDE
Delivery sends heavy truck tires rolling down stairs, causing hundreds in damage
Buying your first home in a red-hot housing market
How to navigate the worst car shortage in generations
Veteran sends SOS to 7OYS for help with a warranty
TOP STORIES
Man dies after being shot outside Bronx church
Mother throws children out window and then jumps
Violence continues at Washington Square Park; curfew now at midnight
Longtime Eyewitness News viewer, 'Toots' passes away just shy of 101st birthday
Hauppauge School District will not make masks mandatory inside school buildings
What mom, daughter did with 80,000 penny child support payment
Polls open in NYC as early voting begins in primary election
Show More
Diver describes near-death experience inside whale's mouth
Legally blind cheerleader, track team member will attend Harvard in fall
Flying taxis could soon become a reality
3 arrested, 1 suspect still at large in drive-by shooting that wounded 4
Runaway peacock captured, police search for owners
More TOP STORIES News