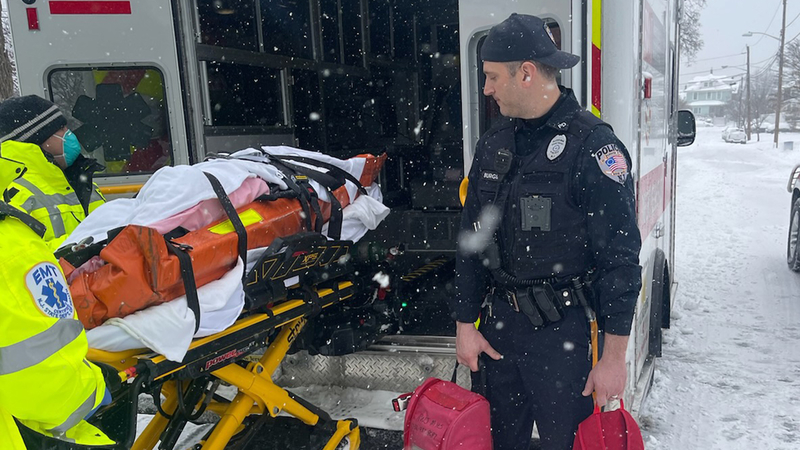 BOUND BROOK, New Jersey (WABC) -- Police in New Jersey are being hailed as heroes after safely delivering a baby at a home in Bound Brook.

Officers responded to a home on St. John's Place after a call of a woman in labor on Saturday, in the middle of the snowstorm.

"It was the height of the storm, so it was snowing pretty hard," Acting Sergeant Thomas Burgin said. "The roads were pretty icy. It was pretty slick out."

The baby, however, was pushing his way into the world on his own clock.

"As soon as I got there, it was apparent that she was going to be going into labor," Burgin said. "The baby was crowning."

It's been about 20 years since any Bound Brook officer has had to birth a baby at home, and Burgin's training -- and daddy instincts -- kicked in.

"I have two kids of my own, so it definitely helped me along because I was present for the birth of my two children," he said. "So I kind of knew what to expect, and it helped things along a little bit better."

Burgin then provided basic first aid to the newborn, who was placed in a blanket and given to the mother until paramedics could take over.

"When his head came out, I assisted in pulling him out," he said. "And then basically making sure his airway was clear, turn him over, rubbed his back a little bit, made sure he was breathing OK."

Other officers arrived and got shovels to clear away ice and snow so ambulance crews could get mom and baby off to the hospital safely.

They were transported to Robert Wood Johnson University Hospital, where mother and son were both checked out.

"When it was all over and done with and I processed it, I was like, wow, that was pretty cool," Burgin said.