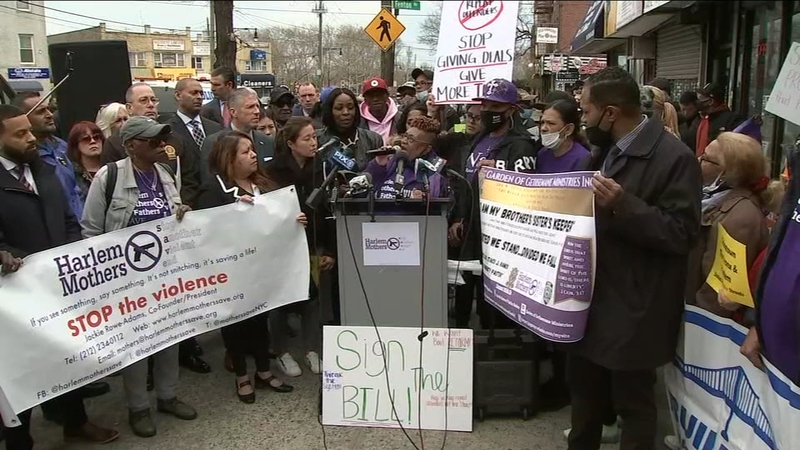 BRONX, New York City (WABC) -- An anti-crime rally was held in the Bronx Tuesday, but it was not representing angry civilians worried about the rising tide of gun violence in New York City.

Instead, the protest was organized by police and included family members of officers killed in the line of duty and victims of gun violence.

The focus was pushing for changes to the controversial statewide bail reform that they say lets violent criminals out of jail.

New York Gov. Kathy Hochul is looking to make changes to recent reforms that would make it easier for judges to set bail for certain violent crimes. NJ Burkett has the details.

They chanted in front of the Assembly Speaker's Office in the Bronx, but the message was meant to be heard in Albany.

"How can I move on when that person who commits such horrible crimes may walk on the streets?" said Eve Hendricks, whose 17-year-old son was killed in June of 2020 shortly after graduating high school.

The protest drew a diverse mix of families.

"People keep saying that this is a Black or Brown thing," Miracle Revival Temple Pastor Jay Gooding said. "But it's a criminal thing. It's about criminality."

Overhauling the law that went into effect in 2020 is among the issues delaying passage of the new state budget.

Assembly Speaker Carl Heastie and Senate President Andrea Stewart Cousins oppose changes, pointing out to studies that show people rearrested for a violent felony after being freed without bail make up just 2% of all cases.

Among those speaking out was the widow of Detective Jason Rivera, one of two NYPD officers killed in January.

Dominique Luzuriaga made news when she called out Manhattan District Attorney Alvin Bragg during the eulogy she delivered. On Tuesday, she said she was there to honor her husband.

Besides "Sign the bill," the chant repeated most often was one the groups hope will strike fear in the hearts of elected officials: "Vote them out."