4 suspects arrested after stealing over $90k in Balenciaga handbags from Hamptons store: police 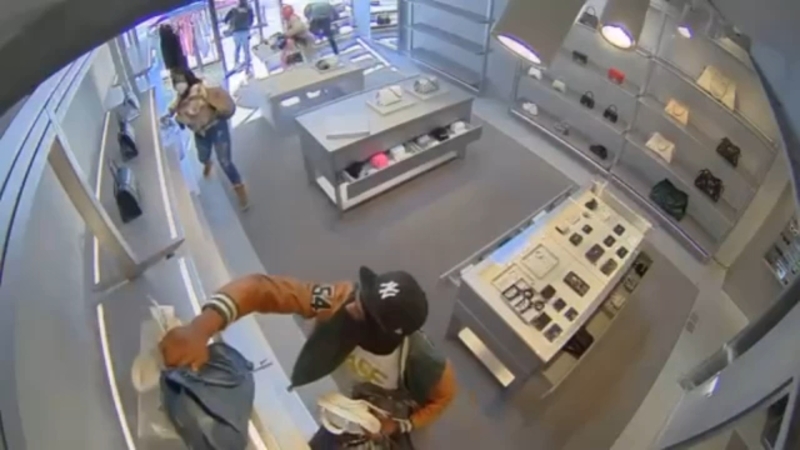 SUFFOLK COUNTY, Long Island (WABC) -- Four people have been arrested for stealing thousands of dollars worth of designer handbags from a store in Long Island, according to police.

The thieves made off with over $90,000 worth of Balenciaga bags from the designer's East Hampton location.

On March 3 surveillance video shows a woman entering the store in a pink ski mask and sunglasses appearing to shop at the store while on her phone.

She asked an employee to check if they had a pair of shoes in her size and when the employee went to the back of the store four other people in masks entered and started grabbing bags, according to court records.

The woman in the ski mask ran out with the others and fled in a Dodge Durango.

An employee at a store near Balenciaga noticed the suspicious activity and called the police.

Officers from the East Hampton Village Police Department chased the Dodge to the edge of their jurisdiction where New York State Troopers picked up the high-speed chase.

But troopers had to back off as the Dodge started driving over 100 miles veering into on-coming traffic.

After continuing to follow the car from a safe distance on the Long Island Expressway, troopers saw the car exit the highway onto Wading River Road.

Three suspects then jumped out of the car and ran to a wooded area. while the two remaining suspects tried to gather up the stolen bags before following.

Officers were able to arrest four of the suspects after searching the area and recovered 36 of the 48 stolen handbags.

"In addition to entering Suffolk County for the purpose of stealing the property of others, their acts put lives at risk when they fled the crime scene and drove recklessly, at times nearly 100 miles per hour," said Suffolk County District Attorney Raymond Tierney. "I hope this case makes clear our commitment to prosecute anyone involved in organized thefts at our retail stores."

The woman who initially entered the store in the pink ski mask is still at large.

The three men and two women that were arrested have been charged with grand larceny and criminal possession of stolen property.