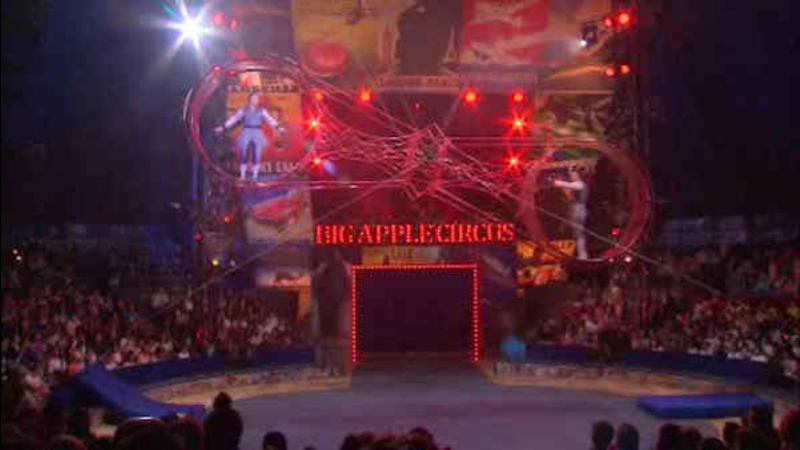 JAMAICA, Queens (WABC) -- The Big Apple Circus, whose performances in New York and around the country have thrilled audiences for years, announced this week that it has not raised sufficient funds to produce a show under its Big Top next season.

The one-ring circus has been entertaining crowds in an intimate setting for 38 years, and with just 1,500 seats, the experience was both charming and exciting. But it hasn't been all smiles and laughter under the big tent, with the circus in financial crisis thanks to a deficit that has accumulated over the past eight years.

"The problems really started back during the financial crisis of 2008," marketing director Karen Zornow Leiding told Eyewitness News at the launch of the campaign to save the circus. "Before then, we used to get a great deal of money from corporations and banks who would buy out our entire tent for private performances."

After the market crashed, companies stopped buying out the big tent for private events. Zornow Leiding said the loss of revenue was made worse by Superstorm Sandy, which shut down performances in New York; the Boston Marathon bombing, which impacted shows in Boston; and Atlanta ice storms that made the tent unusable.

"We are at a point where we really need to bring in enough money to make sure that we have a season next year," she said. "Or we're going to have to close the circus."

The campaign was not successful, but officials say the recent donations of $900,000, short of the $2 million goal, will enable the organization to restructure and continue to provide community service programs, including Clown Care, which brings the joy of classical circus to hospitalized children.

"This is an opportunity for Big Apple Circus to refocus its energy and talent on our programs that uplift the spirits and enhance the lives of children in hospitals, seniors, and others who can benefit from our unique services," executive director Will Maitland Weiss said. "Clown Care, for example, currently works with 16 leading pediatric facilities across the United States and has helped millions of children over its 30-year history. These programs receive substantial philanthropic support and are an essential part of our mission."

Weiss also offered appreciation for all those who contributed in hopes of saving the big top.

"Our deepest thanks go out to the many people who sent donations and voiced their support for the Circus," he said. "While the response was heartening, we ultimately did not raise enough cash to go forward with rehearsals and ticket marketing in August."

Back in 1987, Weiss took his then 2-year-old daughter to see a performance, and he was instantly hooked. A few years later, he started working at the non-profit and has been here ever since. But he's not giving up hope.