Dive-boat fire: What we know about the victims in deadly blaze off Santa Cruz Island 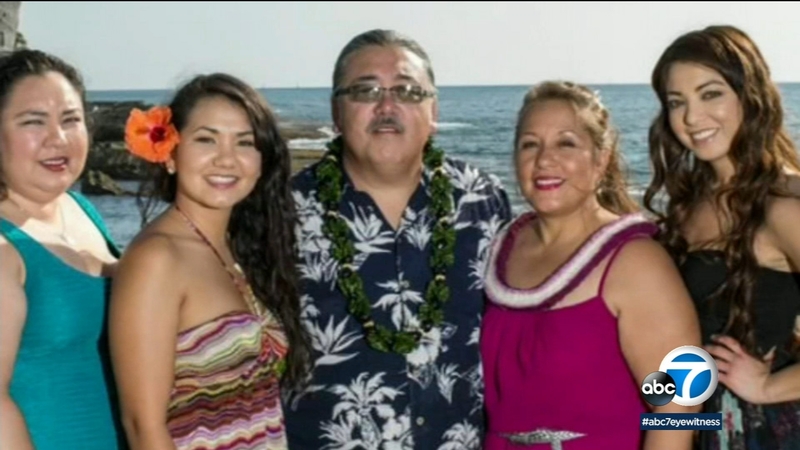 OXNARD, Calif. -- From students to dive instructors to multiple members of the same family, the 34 people who perished in the boat fire off the coast of Ventura County had a wide range of interests and occupations - but perhaps were most united in their love of the ocean.

There were 39 people on board the Conception when it erupted in flames while anchored near Santa Cruz Island during a planned three-day excursion.

The captain and four members of the crew survived the inferno by jumping overboard and floating to safety in an inflatable boat. One crew member and 33 passengers are believed to have perished after being trapped on board the Conception.

More details continue to emerge about those who died in the tragedy:

Kristy Finstad
Kristy Finstad was a diving instructor, marine biologist and co-owner of Worldwide Diving Adventures out of Santa Cruz.

"Kristy was full of love and she had a really fun and dynamic way of showing people that she cared about them," said her brother, Brett Harmeling.

RELATED: Many victims of the Santa Cruz Island boat fire were from the Bay Area

The day after a fire roared through a scuba-diving boat off the coast of Ventura County, portraits were emerging of the 34 victims who are presumed dead in the tragedy.

The Quitasol family:
One family had five members on board the Conception. In a Facebook post, Susana Solano Rosas said her three daughters - Evan Michel Solano Quitasol, Nicole Storm Quitasol and Angela Rose Quitasol - were among the missing, in addition to their father, Michael Storm Quitasol, and their stepmother Fernisa Sison.

Evan Quitasol
"We were extremely saddened to learn the tragic news that one of our nurses, Evan Quitasol, was on board the Conception," St. Joseph's Medical Center in Stockton said in a statement. "We held a prayer gathering in our Chapel this morning to offer comfort and support to our hospital family."

Michael Quitasol
Michael was a former longtime staff member at St. Joseph's Medical Center, according to the medical facility. He was on the boat celebrating his birthday with his daughters and his wife.

Nicole Quitasol
Nicole worked for a Coronado restaurant called Nicky Rottens. The restaurant set up a GoFundMe page to help the Quitasol family.

"Nicole has worked with our Nicky Rottens Coronado family for years, and she will be remembered as an adventurous & loving soul. Our hearts are broken and we can't imagine the pain her family feels," the restaurant wrote.

Angela Rose Quitasol
Angela Rose Quitasol and two of her sisters were part of the scuba trip, their mother announced "with a broken heart." The three adult siblings were accompanied by their father and stepmother. Lincoln Unified School District said she was a teacher at Sierra Middle School for four years and was a former student in the district.

Fernisa Sison
St. Joseph's Medical Center said Sison was a former longtime staff member at the hospital. "Our hearts go out to all the families and loved ones of those on board the Conception," the hospital said.

Raymond "Scott" Chan
Scott Chan, a teacher at American High School in Fremont, and his daughter Kendra were among those on the boat that erupted in flames and sank, according to the Fremont Union High School District. Chan taught AP physics at the school for the last three years.

"Mr. Chan was a beloved teacher at AHS among students and colleagues," the school district said. "His students knew him to be an innovative and inspiring teacher who developed a passion for physics among his students. His loss is a tremendous tragedy for our school district."

She was working as a wildlife biologist for U.S. Fish and Wildlife. In a YouTube video, she talked about her love of diving.

"I grew up scuba diving here in the Channel Islands," she said. "I would go with my dad every year and I love it. It's truly a transformative experience.

"Kendra made her mark at UC Davis," university Chancellor Gary S. May said. "We are grateful for her contributions to our campus community and her dedication to creating a healthier planet. We will remember her."

Nancy Fiedler, the mother of one of the Southern California boat fire victims, said her salvation is believing that her daughter died peacefully in her sleep, after a wonderful day of diving.

Lisa Fiedler, an avid diver from Mill Valley, is also believed to be one of the victims of the boat fire, according to her mother Nancy.

Lisa was on the trip solo.

Salika family
Colleagues at Apple are remembering two co-workers killed in the fire.

Engineer Steve Salika died along with his wife Diana Adamic, and their daughter Tia.

Allie Kurtz
Allie Kurtz a 26-year-old from Santa Barbara worked as a deckhand on the Conception.

Dan Garcia
Daniel Garcia and his partner Yulia Krashennaya were aboard the Conception when it caught fire. Friends confirm they did not survive.

Neighbors living on a Berkeley street can't believe the couple who lived in one house won't be coming home.

"I feel like they were part of my family," said neighbor Madie Price. "They were very nice people who never gave anyone any problem whatsoever-- they added to the neighborhood."

Friends say Garcia was a software engineer and the primary developer behind lighting technology called FastLED.

Carrie McLaughlin and Kristian Takvam worked in San Francisco for Brilliant-- a company that specializes in Stem education.

Carrie McLaughlin and Kristian Takvam were co-workers at Brilliant, a San Francisco-based company focused on STEM.

McLaughlin was a Senior Software Engineer. Outside of work, she was an artist.

Takvam was the VP of engineering.

"The loss of Carrie and Kristian is deeply heartbreaking for all of us at Brilliant. Carrie and Kristian were incredible friends and colleagues who brought immense passion, talent, leadership, and warmth, and they will be missed dearly. Our hearts are with their families and friends."

McLaughlin grew up in Palo Alto and was most recently a resident of Oakland.

McLaughlin's parents still live in Palo Alto. Neighbors told say they are in Santa Barbara to assist in the identification process.

Before Justin Dignam founded a payroll company he coached water polo at universities.

Dignam was a veteran water polo player, who played at University of Richmond before coaching a team at Iona College and becoming the head coach of Wesleyan University's men's team, according to Team USA Water Polo. He also served as a referee.

Big Fish Employer Services President Jeff Hill called Dignam a "fearless" CEO in a letter posted to the company's website. Hill said he was heartbroken but promised to carry on in leading the company to honor what Dignam started when he founded it in 2003 in Placentia, California.

"With dedication in the face of any adversity, we will carry on as the capable team that Justin relied upon, just as he would expect," Hill wrote.

Dignam is from Anaheim Hills, California and is survived by a wife and two children.

Vaidehi Williams lived in Northern California and was passionate about water conservation.

She worked for the Soquel Creek Water District and was raising her two children with her husband, Sarma Williams, according to a GoFundMe page set up to assist the family.

"Vaidehi has touched so many people from so many walks of life," the site said. "She had a way of bringing people together and seized every opportunity to live life to its fullest."

Williams gave presentations about water conservation in schools, drove the district's educational trailer and wore a water droplet costume at the county fair and an Earth Day event, the district said in a statement.

She worked for the district for 18 years, most recently as communication specialist, and helped start its geographic information system platform, the statement said.

"She brought joy to work every day and was a dear friend to all of us," the district said. "She will forever be our 'Water Princess.'"

Dahood-Fritz led efforts to manage the state's network of marine protected areas and cared deeply about the ocean, California Gov. Gavin Newsom said in a statement Thursday. She had done research in Antarctica.

"She embodied marine conservation and was a highly accomplished and respected scientific researcher," Newsom said.

The couple previously lived in Taylor, Texas, where they were known for their photography skills and volunteer work with animals.

Friend Josh Baker said he grew up with Fritz, and the two started a photography business in 2015. Fritz did portraits, weddings and other events. He also shot nature photography, mostly to fulfill his own passion, he said on his photography website.

In May, Fritz wrote in his website's blog that he was so enamored at seeing a Cheetah run at the San Diego Safari Park he had to put down his camera and watch with his own eyes.

Baker said Fritz was supposed to fly back to Austin in a few weeks to teach a photography class in which he was known for taking students to the Texas' Hill Country to shoot the night sky.

"He would teach classes, and they would be sold out for months," Baker told the Austin American-Statesman.

Visual effects designer Charles McIlvain, 44, and his close friend and neighbor Marybeth Guiney lived life to the fullest, according to his wife, Jasmine Lord, in a statement from McIlvain's family.

McIlvain worked on "Spider-Man" and "Green Lantern" among other films.

"His laugh was the greatest and his smile could light up the dark," the family said in a statement. "He embraced life with exceptional joy, openness and humor, and all who knew him felt that warmth."

McIlvain worked as a visual effects designer for Walt Disney Imagineering and as a pipeline engineer and technical animation supervisor at Sony Pictures Imageworks. He also worked at Netflix .

"Chuck was a magnetic person who had an incredible ability to connect with people and help them," Netflix said in a statement. "This is devastating news for those who were fortunate to know him, and he will be deeply missed by his friends and co-workers at Netflix."

Culver City Councilman Alex Fisch said he was a close friend who loved to dive, snowboard and mountain bike.

"I can't emphasize enough the unique combination of creativity, intelligence and wonderful presence that he had," Fisch said.

Guiney, 51, was a sales director and ocean enthusiast who advocated for the protection of sharks. From Boston, she formerly worked as a sales executive for the New England Patriots, which said in a statement that the organization was "deeply saddened" over her death.

"She was the person you wanted to be around. She was fun - the best smile, the best laugh," Carrie Benabou, a friend of Guiney's, told ABC's affiliate in Boston, WCVB.