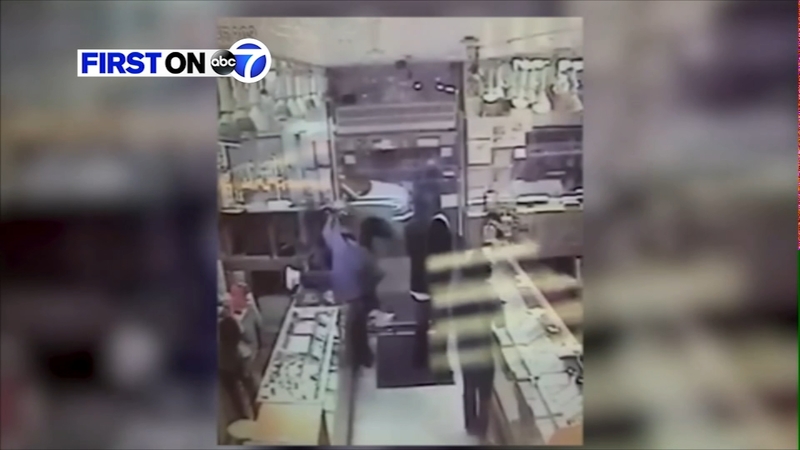 CHINATOWN, Manhattan (WABC) -- Police are looking for two suspects who made off with at least $100,000 in jewelry after robbing a store in Chinatown, and one jewelry designer is speaking out exclusively to Eyewitness News.

Surveillance video captured the crime, which began with one of the suspects casually letting a customer into International Jewelers at 80 Bowery around 2 p.m. Tuesday.

He quickly pulled a gun, as his partner jumped over the counter to get the jewels. Designer Ka-Lai Wong believes the suspects cased the joint, because they knew exactly what what they wanted and where to go for it.

"The gunman had said to his partner, 'Do what you gotta to do, do what you gotta do,' and he was just stuffing the bag with the trays of jewelry out of the window," Wong said. "Only afterwards did I think, this could have been really disastrous for all of us inside."

Wong and others who make, sell and repair jewelry at a number of booths in the store quickly began shoving valuable items into safes while the thieves focused on a large display near the door.

"It was easier for him to get to all of those things," Wong said. "It's also where all the higher priced things were."

Wong said the suspect holding the gun started climbing over the counter.

The thieves then found they couldn't get out the locked door, so one of them fired a shot, shattering the glass. He then kicked the glass out of the door, as the pair escaped with what is believed to be more than $100,000 in jewelry.

"Only afterwards did I think, this could have been really disastrous for all of us inside," Wong said.

Police are looking into the possibility that there could have been a third accomplice.

No one was injured inside the store.