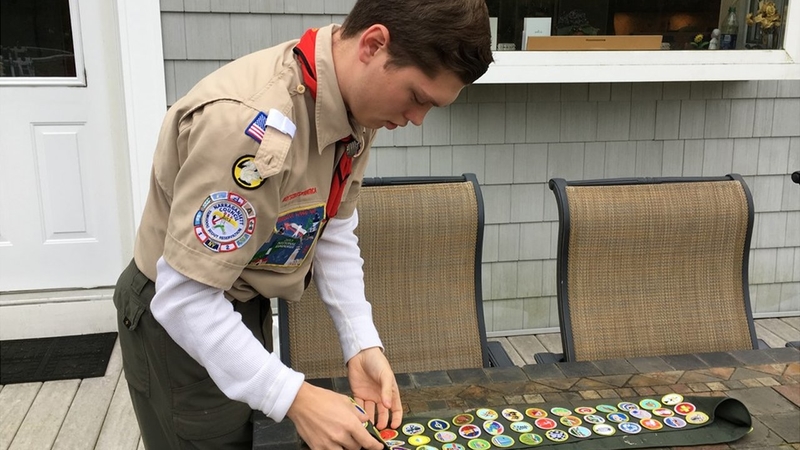 EAST SETAUKET, Long Island (WABC) -- Talk about going for it! It took him nearly seven years, but 17-year-old John Ninia of East Setauket has now earned every single one of the merit badges for Boy Scouts of America. That's 137 badges and it wasn't easy.

From mining, to theater, from dogs, to birds, to insects, to cooking, welding, rafting, kayaking, and waterskiing and scuba diving, there's nothing John didn't accomplish!

But rest assured, they didn't all come easily.

He says waterskiing was the toughest, having to cross the wake four times, which for some reason was most difficult for him.

"It took me two years of working at it, but finally I was able to get up on the skis and do what I had to do," Ninia said.

Ninia decided this would be his goal back when he was only 11 years old. It was his first week at Scout camp and most of the scouts earned three to five badges, but he earned 11 that week. He told his parents he'd decided to earn them all.

His dad Jerry told Eyewitness News, "No one believed him. In fact, I thought that he was kidding around."

But Ninia stuck with it, and so there were family trips to insect museums, rafting journeys, and yes, quarries where Nunia learned about mining.

Ninia can also cook and tell you about the origin of paper. But he is most proud of his environmental accomplishments, having eradicated a local park of an invasive species, called Japanese knotweed.

He has also studied the effects of nitrogen on the Long Island Sound, and helped alleviate the program in one local spot, where he repaired a disheveled rain garden to stop runoff.

Ninia gives his merit counselors and his parents lots of credit. They took the time to guide him, and drive him all the places he needed to go.

He's now applied to 20 colleges, and hopes to start or invest in a "green" business someday.

Eyewitness News asked his mother Lynn, what she thought he might do later in life.

"Something good," she said.