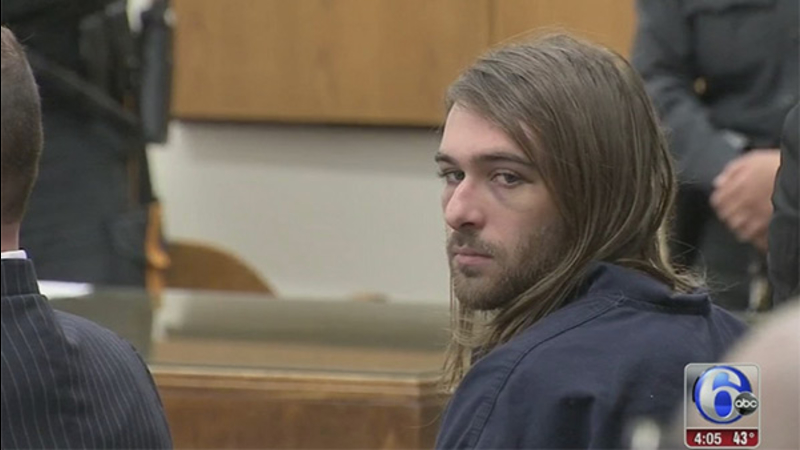 HADDON TWP., N.J. -- Prosecutors say the father of 3-year-old Brendan Creato, who is charged with murder in the boy's killing, committed the crime because the child was an impediment to his relationship with a teenage girlfriend.

Those details came during the arraignment for David "D.J." Creato Jr., 22, on Tuesday afternoon. Creato is also charged with child endangerment and faces a possible life sentence if he's convicted on the murder charge.

"She repeatedly threatened to break up with the defendant, and he repeatedly begged her not to," prosecutor Christine Shah said.

The father of 3-year-old Brendan Creato appears in a Camden County court.

Brendan vanished from his father's home in the pre-dawn hours of October 13th on the 100 block of Cooper Street in Haddon Township.

He was later found partially submerged in the water in a wooded section of nearby Cooper River Park.

It's a location that D.J. Creato allegedly told investigators was "spiritual" for him, and one he had been to some 30 times with his girlfriend, even taking a photo there.

Shah said on Tuesday investigators do not believe Brendan went to that area on his own. First, she said, Brendan's socks were clean despite the muddy surroundings.

Second, she said, family members say Brendan was afraid of the dark, so it was unlikely he would have gone into the wooded area in the pre-dawn hours.

Third, Shah said, there were no signs of forced entry at the home and Brendan slept on a love seat just nine feet from his father's bedroom door.

The prosecutor then launched into what it says is the timeline leading up to Brendan's murder.

D.J. Creato began dating a 17-year-old girl in June of 2015, and the girl had a 'dislike' of children, prosecutors say. Still, the couple kept dating.

In September, the girl went away to college and, according to prosecutors, became upset that Creato had custody of his son every other weekend, limiting their time together.

Furthermore, Creato was alleged to have been jealous of a boy that his girlfriend was talking to at college, and is accused of logging in to her social media accounts. At one point, he allegedly posed as the girl online and told the boy to leave her alone.

The girl repeatedly threatened to break up with Creato, Shah said.

DJ Creato allegedly told detectives he was "jealous and paranoid" his teen girlfriend was going to leave him.

The two did see each other the weekend before Brendan's death, prosecutors say, while Brendan stayed with other family members. Brendan was brought to D.J. Creato's apartment around 8 p.m. on Monday, October 12th.

Phone records from the night before Brendan died showed numerous text messages and phone calls between Creato and his girlfriend.

Around 6 a.m., Creato called 911 to report his son missing. Brendan would be found dead just a few hours later.

As for the cause of death, investigator say it is still undetermined, but Brendan's brain showed a lack of oxygen before his death, indicating causes such as drowning, smothering or asphyxiation. He also had a fresh bruise near his collarbone.

Creato's lawyer questioned the state's case, asking - among other points - why his client would tell police about his problems with his girlfriend. He called it a "weak" circumstantial case.

"Circumstantial is only the word I can think to use," said Creato's lawyer, Richard Fuschino. "It's a weak circumstantial case."

Creato's parents were also in the courtroom.

"We love him very much and we support him through all this. May justice prevail," said D.J. Creato's father, David.

D.J. Creato has been charged with murder for the death of his son.

Action News talked to neighbors on Monday night. They were shocked and dismayed with the outcome and are wondering: if Creato killed his own son, why would he do it?

"That's the whole question everyone is wondering. Why? I don't know," Joe Murray of Haddon Township said.

Friends of the Creato family were finding it hard to believe that David Creato has been charged with his son's murder.

Family friends and neighbors react to the arrest of David Creato.

"It's really hard to believe, hard to believe. The parents, the grandparents are amazing people. I've known D.J. and Sarah since they were babies," D'Angelo said. "I'm praying for the Creato family, this is just awful for everybody involved."

Creato can be heard on a 911 call from the day Brendan vanished, reporting the missing child.

Listen to the 911 call made in the Brendan Creato case.

The 911 operator asks if the child is a boy or girl, and Creato says "A 3-year-old boy. His name is Brendan," then goes on to say the boy was wearing red pajamas.

"I just woke up and he wasn't in my apartment," he said after being asked by the 911 operator if he saw or heard anything. "I don't know if he wandered out or what happened. I don't know where he is."

"The door was locked. I guess he unlocked it and left," Creato continues. The 911 operator then asks him to stay on the line in case the police dispatcher has any more questions.

The family of a 3-year-old found dead issued a statement Tuesday night.