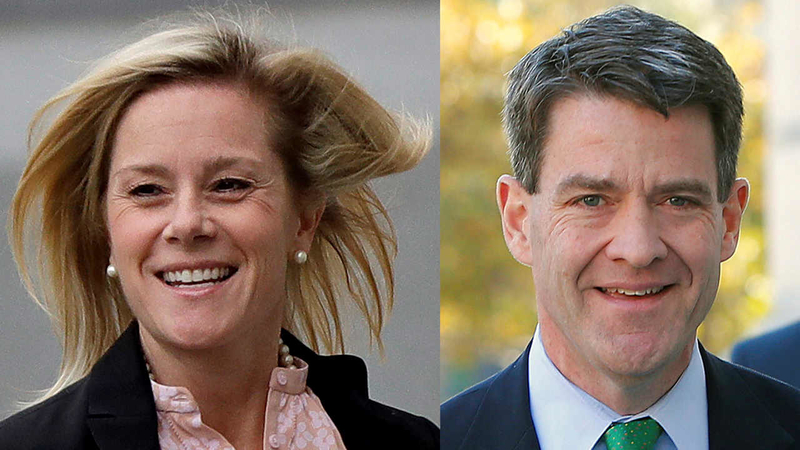 Bridget Kelly, 44, was sentenced to 18 months and Bill Baroni, 45, was sentenced to two years after they were convicted for their roles in the 2013 George Washington Bridge lane-closing scandal. Both must also serve 500 hours of community service.

Baroni did not speak to reporters after the sentencing, but Kelly said it was a very difficult day for her family.

"I want to assure my kids that this fight is far from over. I will not allow myself to be the scapegoat in this case and I look very much forward to the appeal," she said.

Bridget Kelly, former aide to Gov. Chris Christie, reactions to her sentence in the Bridgegate scandal.

Baroni and Kelly had been convicted in November of all the counts against them, including wire fraud, conspiracy and misusing the bridge for improper purposes. They had sought probation.

Speaking directly to Baroni, the judge said: "It's a sad day for the State of New Jersey and a sad day for you. It's often said that the coverup is worse than the crime and that's true, here. The attempts to justify it were far more alarming."

She added, "You have expressed no remorse for this senseless political vendetta."

Earlier, Baroni pleaded for leniency. He said he regretted not responding to the repeated calls for help from the Mayor of Fort Lee.

"I let the mayor down and I let the people of Ft Lee down," Baroni said.

About the lane closures, he said "I didn't stop it, and I should have."

The judge later pointed out that Baroni didn't specifically take responsibility for the scheme, but instead said his failing was in not responding to the mayor. She chided Baroni, claiming he knew then and knows now that there was never a traffic study.

Kelly, who sent the infamous "time for some traffic problems in Fort Lee" email, wiped her eyes with a tissue when she was sentenced after Baroni and apologized, saying she never intended to cause harm.

A prosecution witness testified the plot was to punish a mayor who didn't endorse the Republican governor. Fort Lee suffered four days of gridlock in September 2013.

The scandal derailed Christie's presidential aspirations and likely cost him a chance to be President Donald Trump's running mate. While the sentencing was happening Wednesday, Christie was at the White House to launch a drug addiction task force.

Questions remain over when, and how much, Christie knew about the plan to realign access lanes from Fort Lee to the bridge's upper level. The bi-level bridge is considered the busiest in the country.