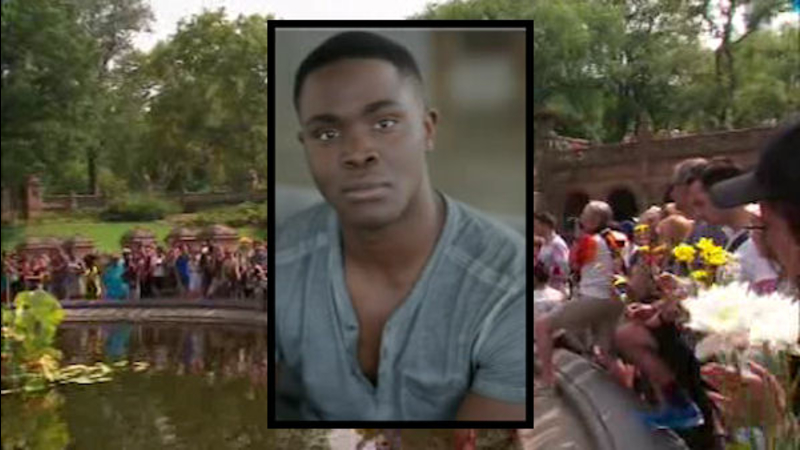 NEW YORK (WABC) -- There was an emotional memorial Monday for a rising young Broadway star who died after falling from a fire escape in Brooklyn over the weekend.

The actor's fellow cast members as well as other theater friends held a tribute for Kyle Jean-Baptiste.

"I don't think he'll leave because he didn't have rules on earth and he said, 'I don't have rules up there,' so he is always going to be with us," said Adrianne Bumpas, Jean-Baptiste's friend.

The tearful young faces in this crowd, surrounding Bethesda Fountain in Central Park remind one of how young Jean-Baptiste was.

The 21-year-old "Jean Valjean" understudy had performed in "Les Miserables" three times in the past six weeks.

He was sitting on his fourth floor fire escape Saturday morning when he fell backwards and died.

"He was sitting on the edge and fell backwards," said Ingrid Campbell, Jean-Baptiste's great aunt.

"How does it happen that a 21-year-old lands this role?" Eyewitness News asked.

"It doesn't, but he did it because he makes everything happen," Bumpas said.

A crowd came together on Monday to mourn Jean-Baptiste. It was made up of Broadway cast members and friends from college, most of them actors and singers, so they surrounded the fountain to sing a song from "Les Miserables" to remember their friend.

Late Monday night, it was announced that the Imperial Theatre would dim it's lights at 10:15 p.m. in honor of Jean-Baptiste following the evening performance of "Les Miserables".