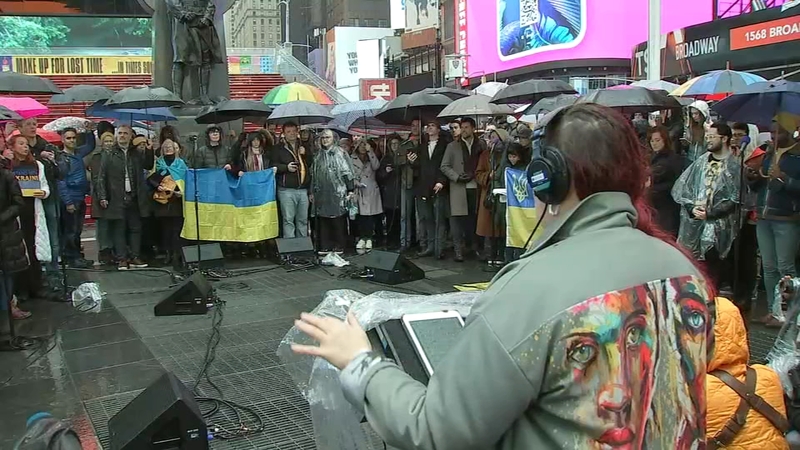 TIME SQUARE (WABC) -- On Sunday the Broadway community held a musical vigil to stand in solidarity with Ukraine.

Performers and other members of the Broadway theater community gathered together to lift their voices to sing a rebellious song from Le Miserable, Do You Hear the People Sing.

Actress Carolee Carmello, who's starred in several Broadway plays, joined her fellow community members to show her support for the Ukrainian people and the refugees fleeing the country.

"It speaks to a people who are oppressed and rise up and that's exactly what Ukrainian people are doing right now," Carmello said.

Supporters gathered in front of the iconic red steps in Times Square and though they're here in spirit, many are thinking and praying for family back home.

Relatives of Ukrainians who are on the move trying to survive and escape the violence joined the Broadway community's vigil.

"They lost electricity, water have no food, no internet, nothing, no communications, they are hiding watching apartments getting bombed every day," Anya Kosachevich said.

Traditionally Time Square is where New Yorkers gather in solidarity to show their support for others around the globe in crisis.

Organizers hoping the simple gesture in some way eases what is no doubt a very complicated situation.