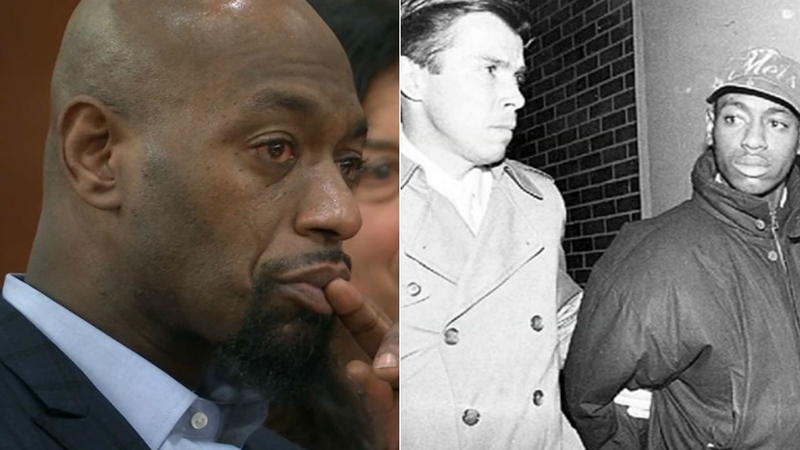 NEW YORK (WABC) -- After spending nearly two decades in prison for being wrongfully convicted of killing his mother, a Bronx man had his conviction thrown out.

Huwe Burton, 46, got out of jail 10 years ago after serving his time, but finally had his name cleared in his mother's murder on Thursday.

"Huwe Burton is an extraordinary individual. The injustice he endured is unimaginable -- to be wrongly convicted of murdering his mother, whom he adored," said Innocence Project Attorney Susan Friedman.

Burton was convicted in September of 1991 for the 1989 stabbing of his mother, Keziah Burton, 59, in her bed in their apartment on Eastchester Road.

Despite no prior brushes with the law, police claimed he brutally stabbed her because she refused to give him the $200 he needed for a crack cocaine debt.

Attorneys with the Innocence Project worked with the Conviction Integrity Unit over the last two years to re-investigate the case.

"Mr. Burton served 19 years in prison and since his release in 2009 has led a law-abiding life. He has maintained his innocence for almost 30 years and now we will clear his name of this brutal killing," District attorney Darcel Clark said.

A review of the case determined his confession to the murder as a 16-year-old was not reliable based on new information on false confessions and contradictions in the proof presented during his trial.

"Now, police and prosecutors use different techniques to interview suspects, and solve and try crimes, and we believe that Mr. Burton might not have been convicted using today's standards in law enforcement and the criminal justice system," Clark said.

Thanks to the review of the case, officials also revealed a far more likely suspect in the case -- a man who has since died.

"I want to sit down and process it, it's a lot to process because of the amount of time I've waited for this day," Burton said. "It just felt like a weight was officially lifted."

Burton said in court that he stood there for his late parents, especially his mother, who he said always taught him to respect the law and law enforcement.

Now he wants to help others who have been wrongly locked up.