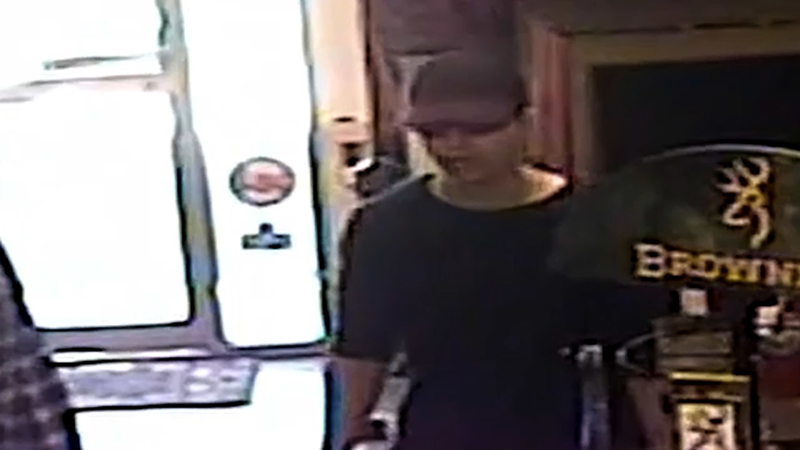 According to police, a man disguised by a ball cap and dark sunglasses waited outside DF Brother's Sports Center on New Utrecht Avenue in Brooklyn, Wednesday, June 28, 2017, until the store opened that morning.

Saul Swinton told 7 On Your Side Investigates he remembered seeing the suspect outside the morning of the attack. He runs La Bella Pooch, a pet-grooming salon, across the street.

"You know, he just looked like everybody else," Swinton said. "So, I didn't pay too much attention until that happened."

Shortly after entering the store, the suspect pepper-sprayed the store owner, then pulled a sledgehammer out of a backpack and smashed open a display of guns, said NYPD Detective Michael O'Halloran.

"It's very brazen," O'Halloran said. "The perpetrator seemed so calm. I have never seen anything like this before."

Surveillance video captured the suspect grabbing two guns from a display case just as the store owner, still recovering from being pepper-sprayed in the face, turned the corner and started shooting at the suspect.

The suspect dropped the weapons and ran for his life, leaving behind his backpack and a sledgehammer.

O'Halloran said blood found at the scene, seems to indicate the suspect cut himself while reaching into the broken glass case.
Despite the evidence left behind, detectives have been unable to identify the suspect.

"It's tough because he is wearing a hat and dark sunglasses so it is pretty tough to tell who he is," O'Halloran said.

The owner declined to talk on camera, expressing fear for his safety.

Since the attack, DF Brothers has improved security by adding extra help behind the counter so that no one works alone.

Anyone with information is asked to call Crime Stoppers at 1-800-577-TIPS.

Police are offering an up to $2,500 reward for information leading to an arrest.