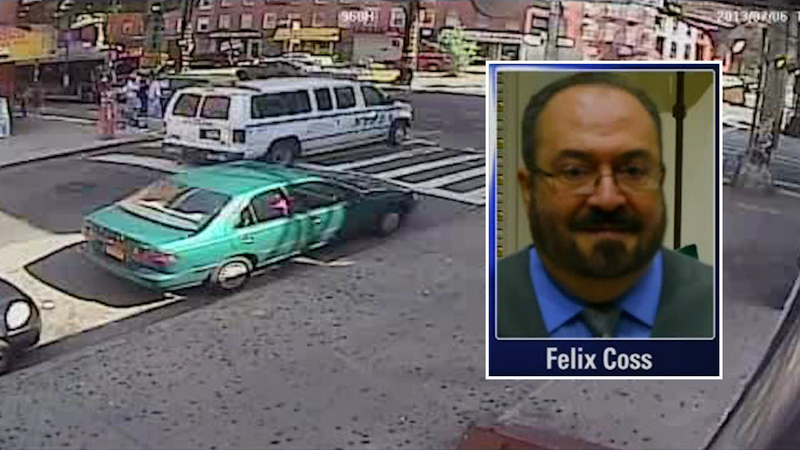 WILLIAMSBURG, Brooklyn (WABC) -- There is frightening video of a 61-year-old teacher from Brooklyn run over and killed in the crosswalk.

He was crossing in the crosswalk at the proper time by an off-duty NYPD officer.

A witness says the cop appeared to be using her cell phone, but now in response to a lawsuit from the victim's family, the NYPD claims the teacher caused or contributed to his own death.

The family is now furious.

Video shows the last seconds of Felix Coss' life, a beloved Spanish teacher struck and killed by an NYPD van as he crossed the street in Williamsburg in July 2013, at the intersection of Broadway and Hooper Street.

His still grieving brother spoke to eyewitness news from Cleveland.

"It's been stressful and things have not been the same," his brother said.

Felix did have the right-of-way and was within the crosswalk, but the city in legal papers blames the man for the accident, arguing he did not take reasonable steps to assure his own safety.
That has kept this case in court for nearly three years.

"According to the City of New York, if you're crossing in a crosswalk with the walk light in your favor, you're assuming the risk of being hit by a car, and if you are hit by a car, you're at fault for the accident," said Andrew Levine, the family's attorney.

The female officer was using a cell phone at the time but the city denies that and argues something inside that van blocked her view.

"There's really no excuse other than she's either distracted, not paying attention, or potentially looking at her phone," Levine said.

Levine says the lack of action by the city in this case goes directly against the mayor's "Vision Zero" program which aims to increase pedestrian safety.

"The police got a free pass here when they killed the man, not even so much as a ticket or a violation was issued. Yet, Mayor de Blasio is on TV talking about 'Vision Zero' every day, how he's an advocate for pedestrian safety," Levine said.

"Stop this nonsense of trying to make my brother look like it's his fault," the victim's brother said.

The case is not over just yet, it's due back in court next month.