MONETA, Va. -- The Roanoke station WDBJ went on the air Thursday morning, the day after two of their journalists were shot and killed live on air.

The 5 a.m. newscast began with the words "In Memory" and an image of the two victims, reporter Alison Parker and cameraman Adam Ward. The morning news team choked up as they reminisced about their slain colleagues.

"We come to you with heavy hearts. Two of our own were shot during a live shot yesterday morning," Anchor Kim McBroom said. 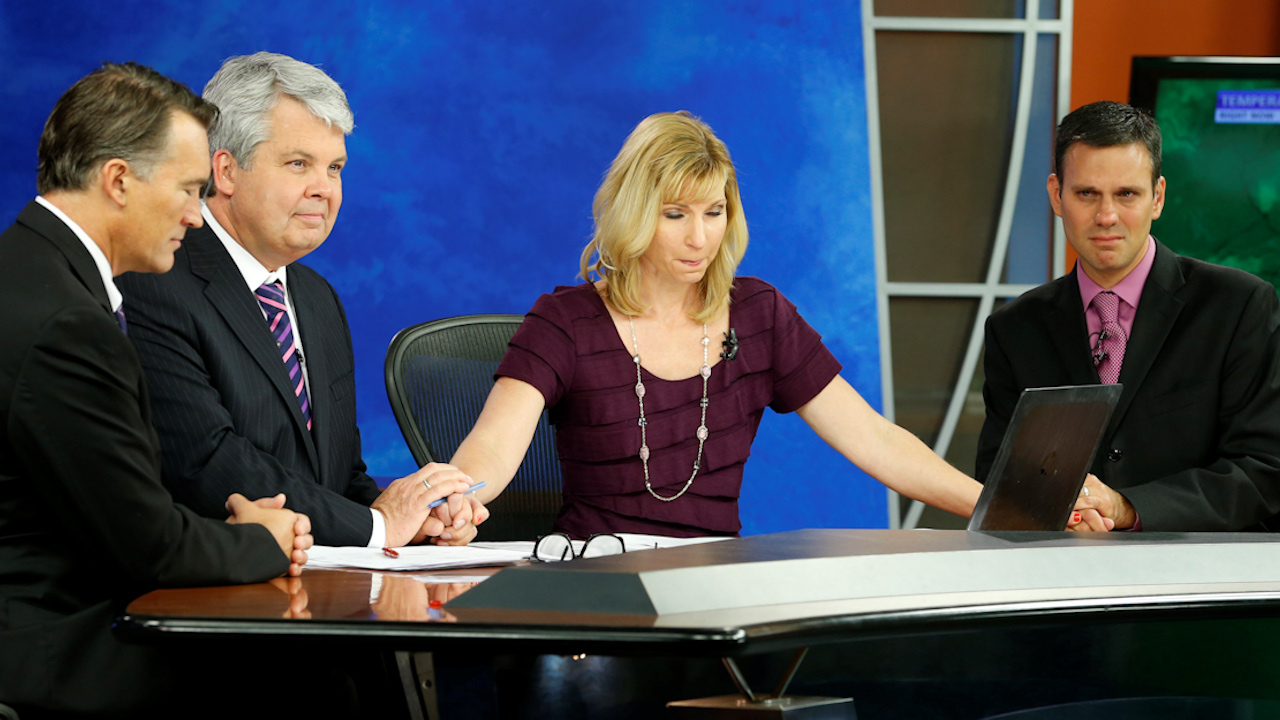 PHOTOS: WDBJ community copes after reporter, photographer killed by gunman
The community came together and the morning team coped on air after a reporter and photographer at WDBJ in Virginia were shot and killed on air.

McBroom, who was on the air just after the shooting, noted the outpouring of support that followed the deaths.

"We've had a lot of help," she added, before introducing Steve Grant, an anchor from a Missouri station who came to town to help.

The station then went into a series of news pieces on the shooting, including ones about the criminal investigation, church services and a vigil at the White House. 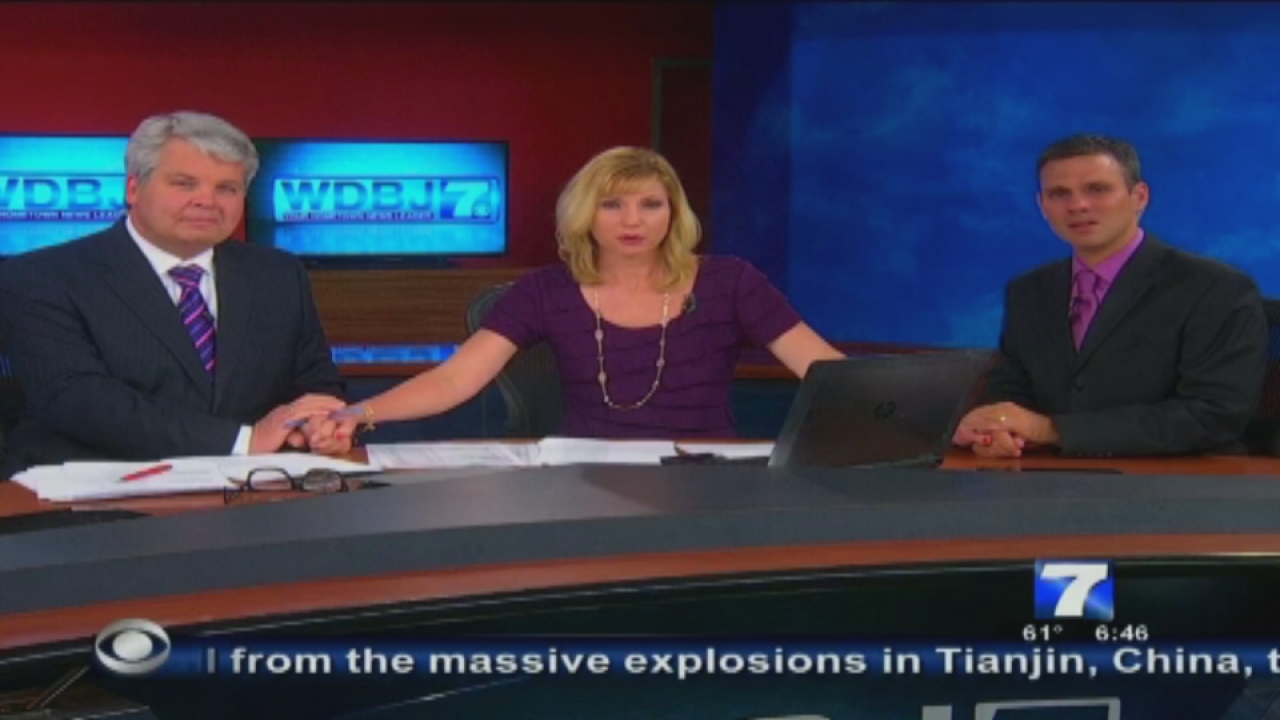 Raw video: Moment of silence
Watch video of the WDBJ anchor team holding a moment of silence for their murdered co-workers a day after they were killed on live TV.

Just before the moment of silence, McBroom joined hands with meteorologist Leo Hirsbrunner and Grant.

"Joining hands here on the desk. It's the only way to do it," she said.

The boyfriend of Parker, station anchor Chris Hurst, appeared at the station where both worked on Thursday, telling his co-workers and viewers that he wants to tell his girlfriend's story even as he grieves.

Hurst recalled how Parker's voice could light up a room with its kindness and joy, and how excited she was about her work, including an upcoming piece on hospice care.

"Alison, what great things she could have done," he said.

Hurst also said he will take a brief break from his anchor role. McBroom, her voice faltering at times, reflected on Hurst's relationship with Parker. She told Hurst they "were like Barbie and Ken -- just the perfect couple."

The team also read a statement from the father of the reporter killed on air just a day earlier. The statement from Andy Parker says: "Our vivacious, ambitious, smart, engaging, hilarious, beautiful and immensely talented Alison was taken from the world. This is senseless, and our family is crushed."

Their morning meteorologist repeatedly mentioned how hard it was to do the weather that morning. Hirsbrunner recalled how Ward would check in with him every morning about the weather before he went out on assignment.

"I don't even know how to do weather on a day like this." His voice trembled at times while he gave the temperatures around the Roanoke area.

McBroom told him: "Good job, partner. We're going to get through this together."

Hurst appeared on Good Morning America Thursday, along with Jeffrey A. Marks, the station's general manager. 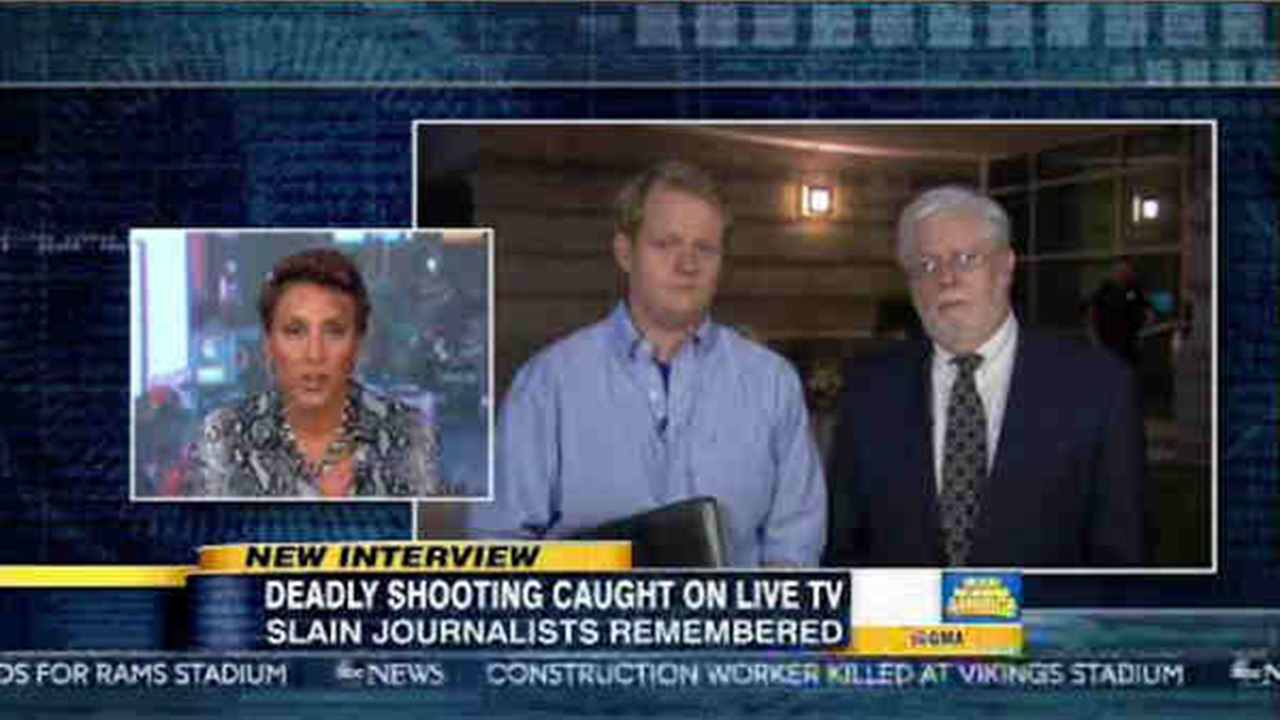 GMA speaks with WDBJ general manager, victim's boyfriend
Chris Hurst, an anchor and boyfriend to one of the victims in Wednesday's WDBJ shooting, spoke out on ''Good Morning America'' Thursday, along with the station's general manager, Jeffrey A. Marks.

"I want everyone to know that she was not only a fantastic journalist, and was well on her way to a remarkable career, but she was good at everything she attempted," Hurst said of Parker.

Vicki Gardner, the surviving victim of the on-air shooting, is now in good condition, according to the Carilion Roanoke Memorial Hospital. Her husband, Tim, appeared Thursday on the Mornin' show. His wife was being interviewed Wednesday for a live segment of the same show when the shooting began.

On Thursday, Gardner stood before a memorial set up to the victims outside the station in Roanoke. A reporter from a sister station in Missouri who came to Virginia to help grieving staff interviewed him.

Gardner noted the support from friends and the community, saying anyone who wants to help can pray for his wife or go out and enjoy Smith Mountain Lake. Vicki Gardner is the executive director of the Smith Mountain Lake Chamber of Commerce, and she's been described as a champion for the area. She was being interviewed about local tourism when she was wounded.