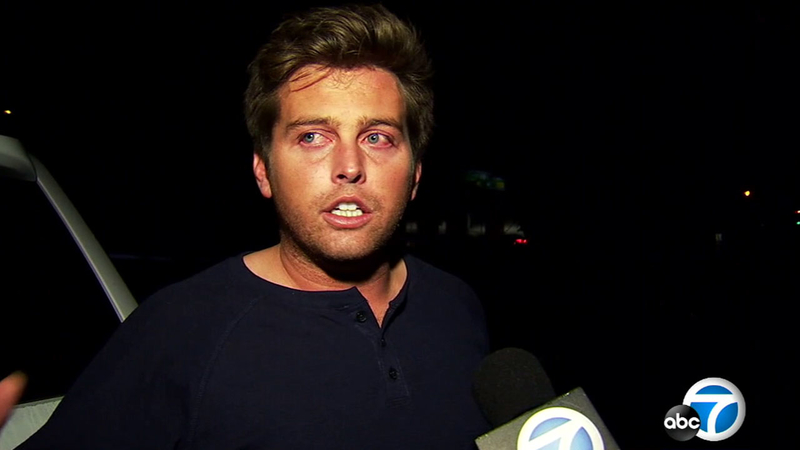 THOUSAND OAKS, California -- A stepfather and his stepson recalled the terrifying moment when a gunman killed 12 people at a bar in Thousand Oaks, California.

The shooting happened late Wednesday inside Borderline Bar & Grill. At least a dozen people were killed, including a sheriff's sergeant, Ron Helus. None of the other victims have been identified.

Witness John Hedge was talking to his stepfather, Tim, when he heard gunshots. He said the security guard at the front of the entrance was shot.

The gunman was throwing smoke grenades and kept firing his weapon.

Chairs were thrown out the window as people attempted to leave the bar, Hedge said. He heard 12 shots before he was able to exit the front door.

"I thought it was a joke when the shots started firing," Hedge said.

"I don't know how I didn't get shot," Hedge added.

MORE: 12 killed in mass shooting at California nightclub, gunman dead
Hedge's stepfather said the gunman didn't say anything during the shooting. The gunman kept firing and reloading his weapon, he said.

"It had a good ring to it," the stepfather said about the shots fired. "It was just loud, and he had smoke. He was trying to confuse people, and he went to the right and just started shooting on the dance floor."

Tim said he went back to get his stepson and left together.

"I was worried about my boy," he said. "I should've stayed. I apologize to anybody who got hurt or passed."

The stepfather described the people inside the bar as 18, 19 and 20 years old.

"They're all young," Tim said. "This shouldn't happen to them."