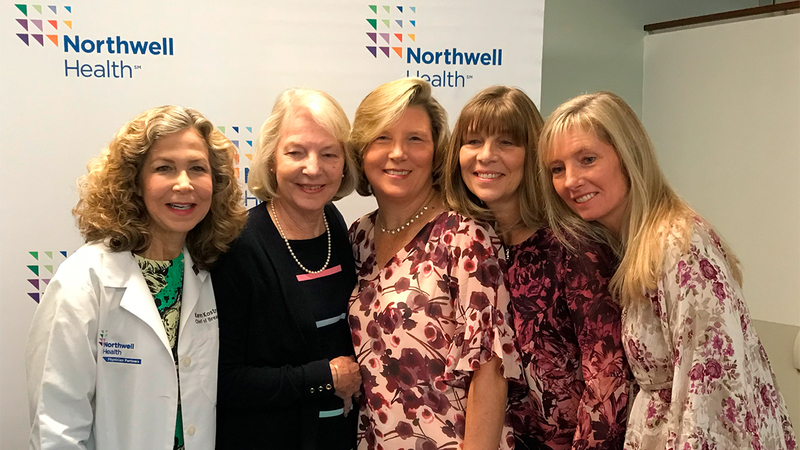 HAMPTON BAYS, Long Island (WABC) -- Where there is pain, there is often progress. No one knows that better than 80-year-old Martha Overton and her three daughters, of Hampton Bays.

All of them have had breast cancer over a span of 25 years, all different types of breast cancer, but all of the women, treated by the same surgeon, Northwell Health's Dr. Karen Kostroff, who feels like a part of the "sisterhood" herself. In fact they all wear matching bracelets.

Two of the sisters carry the BRCA1 mutation, from their father. But that wasn't known until years after all of them were diagnosed. Martha and her youngest daughter, Eva Williams, do not carry the mutation.

"What they represent is the entire spectrum of this disease," Kostroff said.

Kostroff began treating the eldest of the three sisters, Karen Connolly, back in 1993.

"In 1993, I was diagnosed with Stage 4 inflammatory breast cancer. I was terminal," Connolly tearfully explained.

But through experimental treatment, the 57-year-old is now miraculously cancer-free. Her sisters, Juliana Armusewicz and Eva Williams were diagnosed with less severe forms of breast cancer a short time after.

"We had our mammographies, and they found something on both of us, at the same time," Williams said.

Their mom, Martha, was next. First diagnosed in 1998, and eventually enduring both chemotherapy and radiation.

"My strength comes from them, and that's how I got through all that I went through," Martha said.

But her strength also came from her husband, Rich, who had pancreatic cancer. Rich passed away from it three years ago, but that tragic loss helped unlock at least part of this family's mystery, as he tested positive for the BRCA1 mutation.

Juliana has a 28-year old daughter who also now carries the BRCA1 mutation, and when she was only 25, she had a prophylactic mastectomy to prevent breast cancer from ever occurring.

"To have passed that down, to move beyond that, that's the most difficult thing," Juliana explained.

But their doctor points out that with each passing year, more progress has given this family, and others more options. Through pre-natal, genetic diagnosis, Juliana's daughter can eventually have egg selection if she chooses in the future, Kostroff explained.

"And therefore, never pass it to a fourth generation," the doctor said.

"And she is so brave. She is really so brave," Juliana said.

But as all of them have struggled, they also say they feel blessed. And no one knows that better than Connolly, who struggled most.