Car slams into the front of a house in Nutley 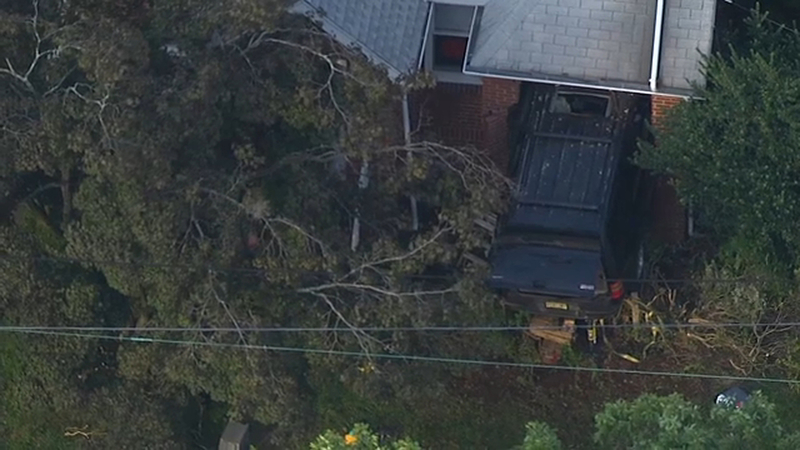 Car slams into front of home in Nutley

NUTLEY, New Jersey (WABC) -- A driver was hospitalized after crashing into the front of a house in New Jersey Tuesday afternoon.

The accident happened at 4:05 p.m. on Lakeside Drive near the intersection with Passaic Avenue in Nutley.

Police arrived to find a 2004 GMC Yukon lodged halfway inside the brick single-family home. The driver, a 46-year-old Nutley resident, was still in the vehicle and needed to be extricated.

The man was taken to an area hospital and is in stable condition.

The residents were not home at the time of the crash.

"I thank my lucky stars that I wasn't home," said homeowner Andrea Stuiso, whose family has lived in the house for 20 years.

She comes home from work and sits right in the room where the car crashed.

As they picked through what was left, the family marveled at their luck. "I normally would have been in that room," said Andrea. "My computer desk is there. So if I had gone home 45 minutes earlier which I normally do, it could have been a whole different story."

Investigators are trying to determine what caused the vehicle to go out of control.

The home is in close proximity to an elementary school and children had just left for the day.

"All we heard was the bang, we look and there's a truck sticking out of the house," said eyewitness Christopher Wanko, a neighbor who was standing a few steps away.

"Cut across the lane into oncoming traffic, jumps a curb and flies into this building," he said. "Oh my God if this was an hour earlier this woulda been a massacre. There's literally dozens of kids walking past here."

It took rescue workers an hour to extricate the driver, conscious and alert, from his wrecked SUV, and then delicately removed the SUV from the house.

It is still structurally sound. The owners were still in shock. "This all could be fixed. Nobody was hurt," said Stuisoh.