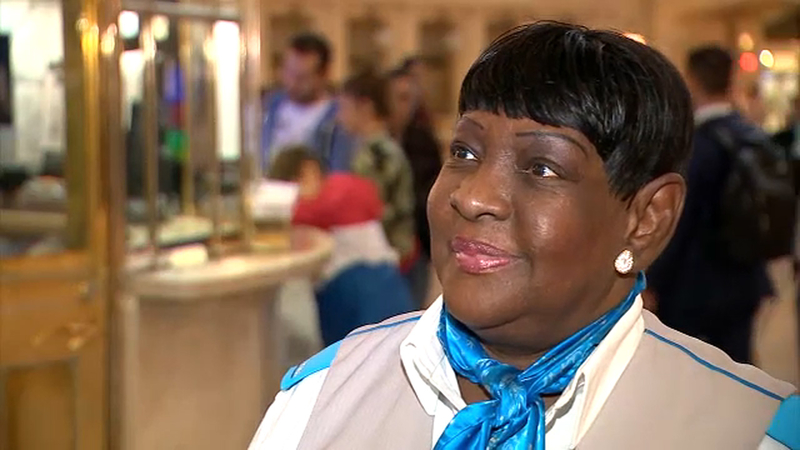 MIDTOWN, Manhattan (WABC) -- Metro-North Railroad will lose one of its most cherished members of staff on Sunday, when Audrey Johnson-Gordon retires after a 40-year career -- one that began before there even was a Metro-North.

Leading up to the days before she retires, Metro-North will come to grips with losing one of its most valued and long running customer service representatives.

While telling Eyewitness News about her long career with the railroad, Audrey remembered one unusual occurrence.

Few people know Audrey has a nickname, but close friend and fellow employee Sheryl Kirk is familiar with the moniker.

"She's called mama bear," she said. "In fact, she owns over 1,000 bears, teddy bears. Throughout the years, everyone has given her bears."

But the Metro-North legend's true passion has always been her work. Audrey would often be found in Grand Central's famous information booth under the iconic clock in the middle of the station.

"You name it, they're going to ask you," Audrey said. "Listen to what the person is asking you. Don't be so quick to give an answer, because the answer that you give them may not be what they are looking for."

Audrey is even featured in a children's picture book sold at the MTA gift shop, where she is beloved for her warm and engaging informational skills.

"I don't know how I am going to replace her," said Tamara Costa, the Assistant Director of Ticket Sales and Service at Metro North. "She has three days left, and I'm a little nervous because she is really irreplaceable."

But even though she's sad, Audrey is also excited for the future.

"It's going to be sad and happy at the same time, because I'm kind of tired and I want to move on to the next level," she said.

Wherever Audrey's next move takes her, she will be missed by many looking for information in the heart of Grand Central.