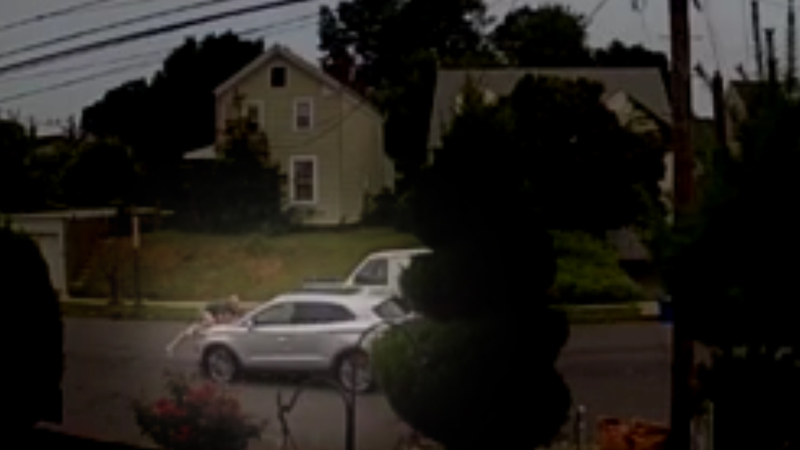 BELLEVILE, New Jersey (WABC) -- Police said two men were arrested after a New Jersey man held on to the hood of his car for two miles in an attempt to thwart a carjacking before falling off and suffering a critical injury.

Officials said it all started when two people walked into the unlocked door of the victim's home on High Street in Belleville around 7:00 a.m. Tuesday. The victim, his wife, and their college-age daughter were sleeping at the time.

The two alleged intruders stole the keys of a 2015 Lincoln SUV, got inside the car, and struggled to start it, as the model uses a keyless ignition system, police said.

This gave the husband and wife time to run outside, police said, and the wife put a garbage can behind the car in an attempt to stop them.

At the same time, the husband attempted to open the car door to yank the alleged thieves out. That's when he jumped on the hood, and the SUV took off.

"I woke up to my mom screaming, and by the time I got out here, they had already left with my dad on the hood of the car," said Angela Dillion, the victim's daughter.

The man held onto the car for two miles before falling off and hitting his head on the pavement at Mill and Bridge Street.

Dillion said her father was critically injured. She said he has a brain bleed, broken ribs, and a broken collarbone.

"He's always just been very protective, so the fact that he went to the extent of going on the hood of a car is -- that's my dad," she said.

Dan Dominguez, the victim's friend, said he's also not surprised that the victim took drastic measures in his attempt to stop the carjacking.

Earlier that morning on Prospect Street, about one block away from the High Street incident, a camera caught a man stealing a Toyota Highlander, smashing into cars on the street, and then speeding away.

The Toyota was also later found -- flipped upside down -- in Newark.

Police in Newark spotted a stolen Lincoln later in the day and took two people into custody.

Authorities later announced two men from Newark were arrested and one has been charged with attempted murder in connection to the incident.

Lorenzo Esiahs, 18, was taken into custody after a short chase. He is facing charges of burglary, theft, carjacking, conspiracy and attempted murder.

A 17-year-old suspect was also arrested but police did not say what charges that suspect is facing.

"This is a terrible community tragedy that we are all dealing with, our thoughts and prayers are certainly with the victim and his family," said Belleville Mayor Michael Melham. "It comes on a day we mark National Night Out, a celebration of our public safety. This community has no tolerance for such crime."

Melham urged all residents to remain vigilant and always lock their doors.