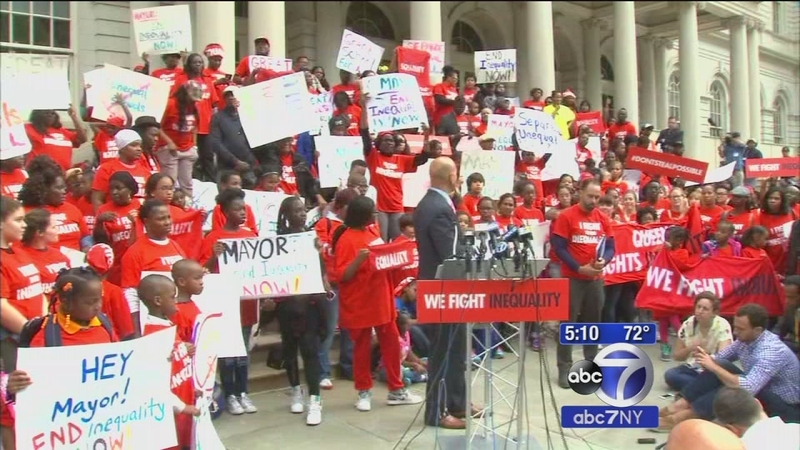 Cadman Plaza was awash in red T-shirts bearing the slogan "I Fight to End Inequality," and some participants waved red flags. The crowd listened to nearly two hours of speeches and hip hop performances before Hudson's brief set.

In all, about 15,000 parents, students and teachers were there, urging Mayor Bill de Blasio to back charter schools, to give them more money, more space within public schools.

Organizers and parents say it would be more equal, more fair if the mayor would only see it their way and back charter schools as a fix-it for public education in New York.

"These schools are producing productive children and the education is out-of-sight. It's awesome," said Brooklyn parent Dawn Voss.

Protesters then marched over the Brooklyn Bridge to City Hall, to deliver the message in person.

But the mayor told us a couple of weeks ago in an exclusive interview that he sees the path to improving schools as:

-PreK for all 4-year-olds.
-Mandatory algebra classes.
-And new reading teachers for all 2nd-graders.

"That's the path to raising achievement, not just for some students but for all students," the mayor said in a statement Wednesday.

"Charter schools are part of that system and all we want from you, Mr. Mayor, is to treat them equitably," said Bronx Borough President Ruben Diaz Jr.

"A lot of people want to make this about us versus them. That needs to stop! We are talking bout our babies! They are all our babies," said Diaz.

Speaking from the stage, Zarida Teel said she suffered while attending bad schools when she grew up in Brooklyn. She called her former school, Prospect Heights High School, "a failure factory."

Teel said she wanted better for her daughter, second grader Eliza, who attends Girls Prep Bronx charter school. "It's the school I always dreamed she would go to."

Kimberly Hanley, meanwhile, said her son Jaden just started Success Academy Harlem 2 after attending a district school. Educators at the charter school take time with the third-grader and make sure he understands the lessons, she said.

Organizers say hundreds of thousands of city schoolchildren are trapped in low-performing schools, and they're urging de Blasio to support the growth of charter schools as an alternative.

Speakers also accused de Blasio of blocking the expansion of the charter sector.

The de Blasio administration, which has attempted to curb charters' growth but has not tried to close schools, denied the charges and touted its own education achievements, including the expansion of universal pre-K and the installation of reading support specialists for all second-graders.

"Mayor de Blasio is focused on ensuring that every child, in every classroom, has a future that isn't limited by their ZIP code," said mayoral spokesman Wiley Norvell.

The battle over charters has remained a thorny political issue for de Blasio.

The rally included many children and parents from the Success Academy charter school network, which is run by Eva Moskowitz, a longtime de Blasio adversary. Many of those students are minorities and their presence at a rally on the City Hall steps is a less-than-ideal image for de Blasio, whose administration's stated central focus to help the city's downtrodden.

De Blasio has long been cool to the charter movement, but other politicians have gravitated toward it. Gov. Andrew Cuomo attended a charter rally in Albany last year and the issue has become another wedge in his relationship with de Blasio. And Diaz, who like Moskowitz is a rumored challenger to de Blasio in 2017, was one of the primary speakers at the City Hall rally.