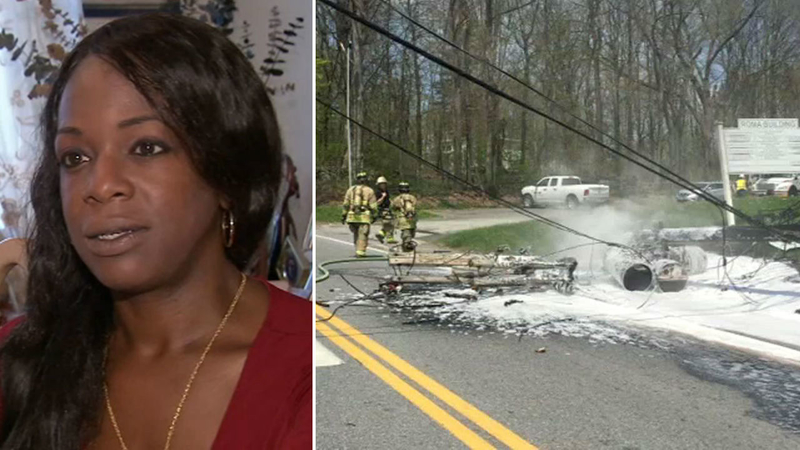 YORKTOWN HEIGHTS, Westchester County (WABC) -- An off-duty paramedic is being hailed as a hero after her last-second decision to blow her diet may have saved a life.

Christiana Corrado grabbed a slushie at a 7-Eleven in Yorktown Heights when a car suddenly slammed into a pole and crashed into a store.

The EMT jumped out of her car and raced to help. Tire tracks show the path the out-of-control car took after it hit the utility pole and crashed into a CVS. Luckily for the driver, the paramedic watched it all unfold.

"I opened the gentleman's side door," she said. "I see that he's unresponsive. I check for a pulse and there is none."

Corrado recognized the seriousness of the situation: An unconscious driver and a fiery path of destruction left in his wake. It happened Thursday morning, with the first collision knocking down a transformer and sparking a fire. The second crash cracked the facade of the business, all after the 61-year-old driver suffered an apparent heart attack.

"At that point, I guess you would identify it as clinically dead, for lack of a better term," she said.

Corrado has been an paramedic for more than two decades and now teaches emergency medical care at Westchester Community College. She was unexpectedly thrown into the life-and-death scenario during a morning of running errands and a quick detour for a slushie on a hot day. She immediately began chest compressions.

"As we were doing CPR, that blue started to turn into a pale, and the pale turned into a pink, then his eyes start to move," she said. "And he actually opened his eyes."

The victim, Michael Androsko, is a former chief with the Yorktown Heights Volunteer Fire Department and owns a landscaping business.

"His main concern at that point was, was anybody else injured, did I hurt anybody during this," Corrado said. "And I thought that was phenomenal."

Androsko is recovering in the hospital, and friends are thanking his guardian angel.

"I don't even think a thank you is needed," she said. "I honestly feel like I did what I was supposed to do."

Corrado never got to enjoy that slushie. She said it was melted and spilled when she got back to her car. But there was a far sweeter outcome, as a life was saved.