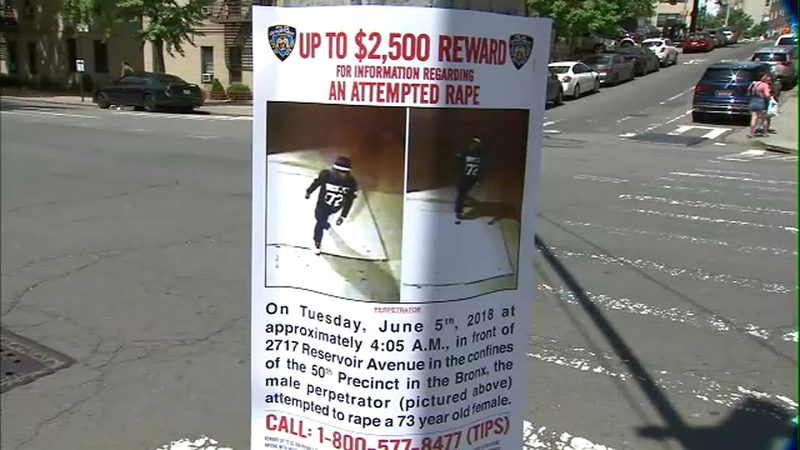 FORDHAM MANOR, Bronx (WABC) -- Police are looking for a suspect in a vicious sexual assault of a 73-year-old woman along Reservoir Avenue.

A suspect has been arrested in an assault, caught on camera, of a 10-year-old girl who was violently thrown to the floor.

And this past weekend 17-year-old Vlana Roberts was killed in a senseless shooting. Three high profile crimes in the Bronx have residents wondering if crime is on the rise.

"There is no place to feel safe now no matter where you are," said one resident.

"They are out there attacking them at whim and nobody is saying anything. That day has stopped. We as a community have to step up and say enough is enough," said Tony Herbert, with Advocates Without Borders.

While NYPD statistics for the Bronx show that murder is up 71% and rape is up 45% for the year to date, overall crime is down nearly 4%.

When asked about an increase in rapes citywide Police Commissioner James O'Neill said, "More rapes? We think it's a result of outreach, more people are coming forward. The survivors of sexual assault are coming to police and reporting these crimes."

But ask residents and some tell you they don't feel safer. "I'm always looking at my surroundings to make sure we are safe but you just never know who is going to run up behind you or whatever. It's very alarming," says Tenisha Barrett.

I asked Ramon Gonzalez if he feels safe when he walks the streets and he told me, "Yes and no. I'm always looking out for myself."

"I make sure that I stay with a group of people or I always take cabs," said Starr Arroyo. "I never just walk."

While CRIMESTOPPERS is offering a $2,500 reward in the latest sexual assault, there is more money for information.