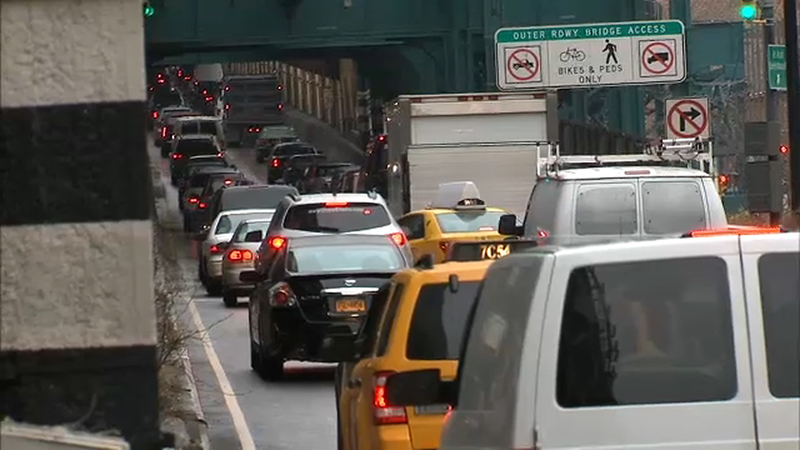 FORT LEE, New Jersey (WABC) -- There is outcry in New Jersey over New York's recently approved congestion pricing plan, with some Garden State lawmakers saying it is unfair to commuters who already pay tolls to drive over the George Washington Bridge.

"This proposed congestion pricing scheme is a bridge too far," Pascrell said. "New Jersey must get a say in the matter."

The plan approved by the New York State Legislature has finally gotten gotten the fast track from the Biden Administration for an environmental assessment.

But the New Jersey lawmakers say congestion pricing would amount to an extra $3,000 tax per year on Jersey motorists who use the already pricy GWB once they drive below 60th Street in the city.

The revenue would be used to help the MTA, but Jersey lawmakers are writing the transportation secretary to express their dismay -- saying Jersey motorists are going to suffer the most and pushing to stop future grant funding to MTA projects if congestion pricing becomes a double tax on Jersey drivers.

"Jersey commuters shouldn't be responsible for bailing out the MTA for their mismanagement, their failings," Gottheimer said. "And they want us to stand in and bail them out? I don't think so. This is just New York mooching off Jersey once again to solve their own problems. It's a joke."

Remembering Prince Philip: This is a look at the life of Philip before and during his time as a member of the royal family.

The congestion pricing would not impact drivers using the Holland or Lincoln tunnels, and Gottheimer and Pascrell say the plan would force more drivers to use the tunnels -- which would only create more traffic going into the city.

"This is a decision for the different parties that are all involved in that," he said. "Our responsibility mostly has to do with the environmental assessment process that goes on. We are certainly very interested to see that process unfold. We think different solutions work differently for different parts of the country.It'ts not an example of something that is best designed here in Washington and imposed on local communities. Obviously, there is a real challenge with congestion there, and a real revenue opportunity there as well."

As for claims that New Jersey officials had no input, Feinberg said the topic has been discussed for years.

"It's been on the table and it's been debated in this state for longer than I've lived in this state, so if New Jersey wasn't in the loop, they should have jumped in," she said. "We've been debating this for a long time. It passed the state legislature a long time ago. It's been sitting with us, DOT for four years, three years. and was acted on. We got guidance on the environmental process in the last week. So this is not news to anyone, I don't think."

New York received a key approval in late March to move ahead on a long-delayed plan to charge motorists an additional toll to enter Manhattan's core, a move aimed at reducing congestion and raising money for public transit systems.

If the plan is implemented, New York would become the first U.S. city to use so-called congestion pricing -- following in the footsteps of London, Singapore, Stockholm and other cities.

New York would use the revenue, estimated at about $1 billion annually, to issue bonds to fund $15 billion in capital improvements over the next four years to refurbish an aging and underfunded subway and bus system whose revenues have plunged during the pandemic.

The state Legislature approved a conceptual plan for congestion pricing two years ago and it was initially projected to be in place by early this year, but the pandemic and a lack of guidance from federal regulators on the type of environmental review that was required combined to stall the project.

In a letter, the Federal Highway Administration notified local officials that an environmental assessment will be required that will include a public comment period.

MTA Chairman and CEO Patrick Foye said in a statement, "It's more important than ever that our region has a strong and robust MTA to help power the economic recovery from this unprecedented crisis, and as traffic returns to pre-pandemic levels we must tackle congestion."

Empty cruise ships were scheduled to arrive Friday at the eastern Caribbean island of St. Vincent to help evacuate thousands under threat of a volcanic eruption.

Numerous details still need to be finalized, including the price of tolls, how they're collected and which vehicles might be exempted or receive discounts.

The tolls are expected to be levied in an area from the southern border of Central Park to Battery Park at the bottom of Manhattan.

The plan has drawn some opposition, notably from lawmakers representing New Jersey, where residents driving into New York already pay as much as $16 in cash to cross the Hudson River.

"Thousands of Jersey drivers from my district, who commute every day, will face a new congestion tax of about $3,000 a year," Gottheimer said previously. "That's a joke. This is absurd double taxation at its finest, and it's absolutely ridiculous."