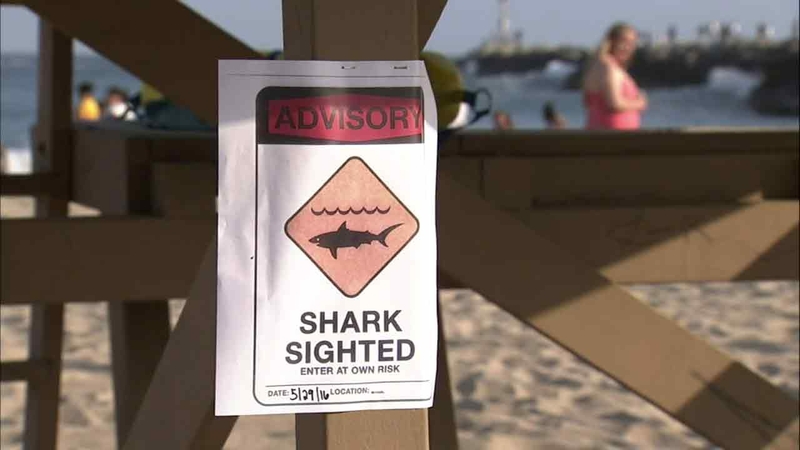 CORONA DEL MAR, NEWPORT BEACH -- Fears of a shark attack forced the shutdown of miles of Southern California beach after a swimmer with large bite marks was pulled from the water, authorities said.

A beachgoer 150 yards off the coast of Corona del Mar State Beach in Newport Beach was possibly bitten by a shark Sunday afternoon, according to rescue officials.

Newport Beach lifeguards patrolling the waters spotted a female swimmer in distress at about 4:15 p.m. near the 1900 block of Bayside Drive. They heard the victim screaming and upon arrival discovered her with what appeared to be an animal bite wound or wounds to her shoulder and upper torso.

According to Newport Beach lifeguards, the victim was bleeding heavily from her wounds but was conscious and talking to emergency personnel when she was transported to a nearby hospital.

Eyewitness News learned Orange County Global Medical Center received a middle-aged female patient with wounds consistent with a shark attack, and she was expected to survive.

Elizabeth Harris was at the beach and believed she may have seen the animal that bit the woman.

"I couldn't really tell exactly what is was, but it was big and it was gray, and we heard somebody say that a woman was attacked," she said. "We assumed it was a shark because it looked pretty big."

A police helicopter assisted in the evacuation effort and searched the water to try and determine what type of animal bit the victim, according to a press release issued by the city of Newport Beach.

"We are going to keep the area closed until we feel comfortable that there is no threat to the public in this area," said Newport Beach Fire Department Chief Lifeguard Rob Williams.

Authorities said they would reevaluate the situation in the morning before making a decision on when to reopen the waters.

The woman was swimming about 100 yards offshore, just outside the buoys marking a protected swimming area, near the area where boats can travel.

"We have a lot of triathletes and long-distance swimmers who use this beach for training," lifeguard Battalion Chief Rob Williams told KTTV-TV.

The lifeguards who saw the woman witnessed the last part of the attack and quickly ruled out any kind of boating or watercraft accident, Williams said.

There have been no recent reports of sharks in the area, he said.

The beach was busy at the time, but not as crowded as it often is on the Memorial Day weekend Sunday, Williams said.