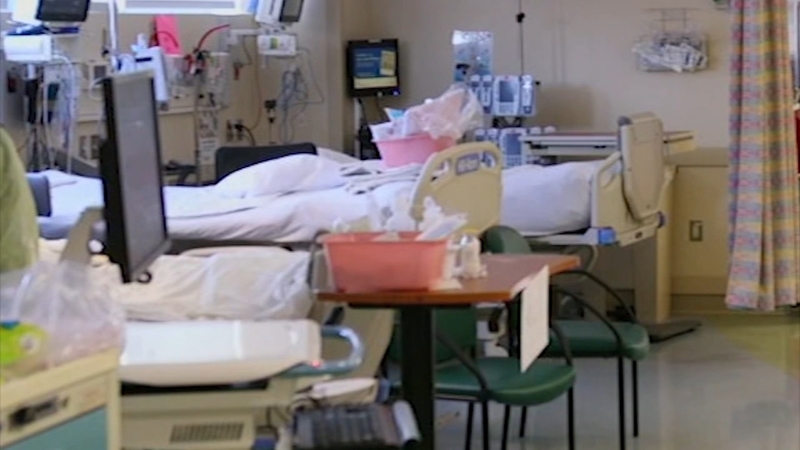 LONG ISLAND (WABC) -- Mary Halliday, an ICU registered nurse for Northwell Health, has started a revolution of sorts in hospitals across Long Island all stemming from one thought she couldn't shake.

"I couldn't imagine being that person with a family member in the hospital and not being able to see them," she said.

Two weeks ago, the mother of four put a post on Facebook telling people if they have family members in the ICU within the Northwell Health system she would be happy - either before or after her shift - to spend some time with them, holding their hand or saying a prayer.

"I just wanted to find a way to connect with these families," she said. "I figured: I can go to work 15 minutes early. I can stay 30 minutes late."
She heard from a past co-worker whose grandfather was in the ICU. She called the man's family from his bedside via FaceTime.

"They were able to talk to him, say a prayer to him. He passed a few days later, but that connection never would have happened, they never would have been able to see him one last time," she said.

"The bedside nurses are so busy and they are so willing, but it's hard sometimes and we don't want the family to feel that we don't have time for them, so this is just another way to make time," she said.

Nurses across Long Island have been copying and pasting Halliday's post, offering to take up the same mission.

One of them is ICU physician assistant Tammy Haber. She made her Facebook page, Tammy Lynne, public just so complete strangers can message her.

"This could easily be my family member laying there. So it's very personal," she said.

Haber, who is also the Director of Physician Assistants for Neurosurgery and Neurocritical Care for Northwell Health, said she has read letters to people who have just hours left to live.

"A lot of these letters are written knowing their loved ones are going to pass within a couple of hours," she said.

Haber recalled one letter specifically, which read: "Thank you dad for everything you've taught me. You've taught me how to be a father and a man and I know now you're going to be with mom and be at eternal rest." Haber said she also connected a young man who was critically ill with his wife.

"She just asked for me to place my phone on speaker so she could, you know, hopefully he could hear her voice and just to hear the emotion in her voice of her pleading with him to keep fighting, to come home, to come home to her and the kids," Haber described.

Haber said she's received requests to put cards up in patients' rooms and even has hand-delivered phone chargers to patients.

"I think a lot of us are willing to accommodate any of these requests. Don't be shy to ask," Haber said.

Halliday and Haber said they spend hours everyday trying to connect people with their loved ones at area hospitals. If they don't work at a hospital directly, they reach out to friends at other hospitals to try to make the connection.

"I'm willing to pick up a shift in a hospital that I'm affiliated with if I can't connect someone at that hospital," Halliday said.

At Long Island Jewish Medical Center they purchased 20 iPads and have had dozens more donated so patients can FaceTime with their families.

"Before we started this they had been disconnected from their family members for some time and to see that moment when they reconnect is something really special and it touches your heart," said Michael Goldberg, Executive Director of LIJ Medical Center. Goldberg said a man was able to connect with his family only minutes before dying.

"After he was done saying goodbye and hearing his family members say goodbye to him and they had hung up their FaceTime call, several moments after that he had passed away," Goldberg said. "It was a beautiful moment as the team relays it to me because prior to that he had not been responsive."