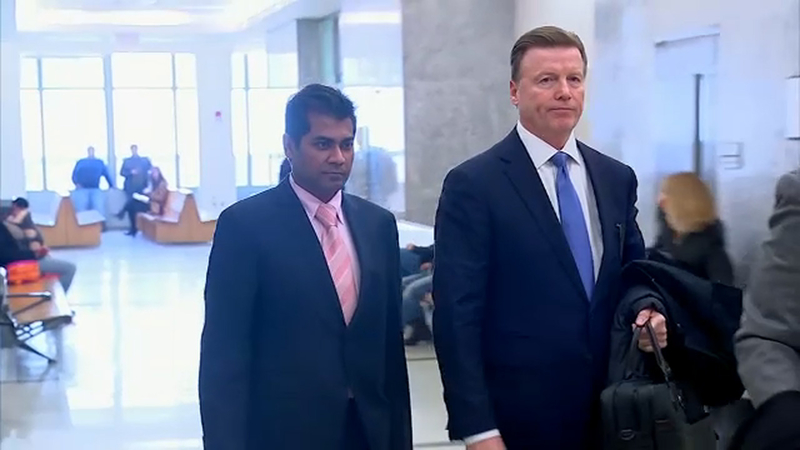 BROOKLYN, New York City (WABC) -- A married Harvard-trained doctor accused of killing his pregnant mistress' baby in a jealous rage was in court in Brooklyn Tuesday.

Authorities say cardiologist Dr. Vignendra Ariyarajah had two people hold Paul Marie Raymond against her will inside her Ditmas Park home in 2016.

One of them was his friend Bridgett Singh, who is also named in the indictment.

Police say Raymond -- who was seven months pregnant at the time -- was starved, fed very little water, and was given drugs like fentanyl to try to kill the unborn baby.

At one point, prosecutors said she was left lying on a sheet on the floor, semi-comatose, moaning and covered in vomit. She was later treated for a blood infection and dehydration, and prosecutors say she also say she appeared to have chemical burns on her face, rope marks on her arms and legs, and torn off fingernails.

According to court documents, Dr. Ariyarajah and his wife were on vacation skiing in Montana at the time.

Even with a 13-count indictment hanging over his head, Dr. Ariyararajah's business card remains front and center inside his Church Avenue medical clinic -- which is where he worked with the victim, who was his alleged mistress.

Authorities painted a disturbing picture of just what how far they say he went after learning she was pregnant with another man's baby.

On December 23, 2016, the victim escaped and ran out of the building. The doctor allegedly sent an ominous text to Singh, writing, "Never, never, never forget to take keys when you leave apartment," adding that if Raymond ran outside, "You must follow her...cannot leave her outside on her own!!!"

Singh allegedly brought her back inside and gave her medication to "calm her down."

Then December 24, Christmas Eve, the victim was in labor. Singh allegedly called 911 but then canceled the ambulance.

When EMTs arrived, the victim had given birth. The baby boy was alive, but he died later that same day.

An autopsy ruled the cause of death to be an infection caused by prolonged labor, experts believe about four days.

Dr. Airyarajah is charged with criminally negligent homicide, manslaughter and assault, among other charges. He is free on $750,000 bond.

On Wednesday, he was ordered to stop practicing medicine in New York State by the state health department "pending the outcome of a full investigation."