What do television personality Caitlyn Jenner, MMA fighter Ronda Rousey and businessman/presidential candidate Donald Trump all have in common? They are all on the list of Barbara Walters' most fascinating people of 2015.

Jenner topped Walters' annual list, which looks at the biggest names and personalities who shaped 2015. The list included Hollywood heavyweights, business magnates, a groundbreaking ballerina and presidential hopefuls, all of whom were at the center of public attention in 2015.

During the the ABC News special "Barbara Walters Presents: The 10 Most Fascinating People of 2015" on Thursday, she delved into each of their lives and careers and talked about what makes them so fascinating.

Walters prefaced Jenner's segment by saying that she was already fascinating before this year for once claiming the title of "the world's greatest athlete" by winning the Olympic decathlon in 1976. However, Walters said, "When Bruce Jenner became Caitlyn Jenner, there was a seismic shift in the gender universe." Walters explained that even though Jenner was a "lightning rod for criticism" because of her public transition, she used that spotlight to educate herself and others about the challenges transgender people face. 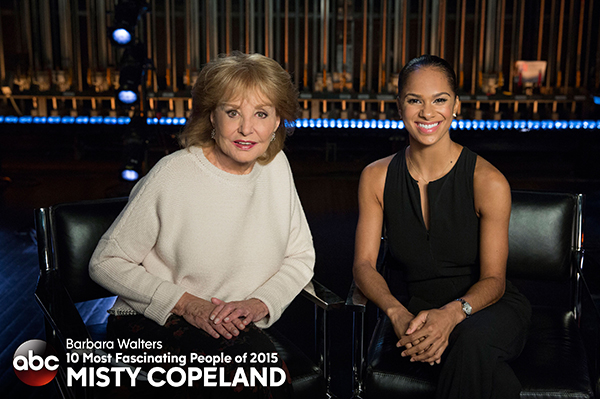 Copeland started her ballet career when she was just 13, dancing in a class at the Boys and Girls Club. The 33-year-old made dance history in 2015 when she became the first African American female principal dancer in the storied American Ballet Theatre's 75-year history. Despite her accomplishments, Copeland has faced a lot of adversity along the way. The dancer spoke with Walters about her tumultuous childhood, and how she felt the possibilities of landing a spot at the American Ballet Theatre were very slim. 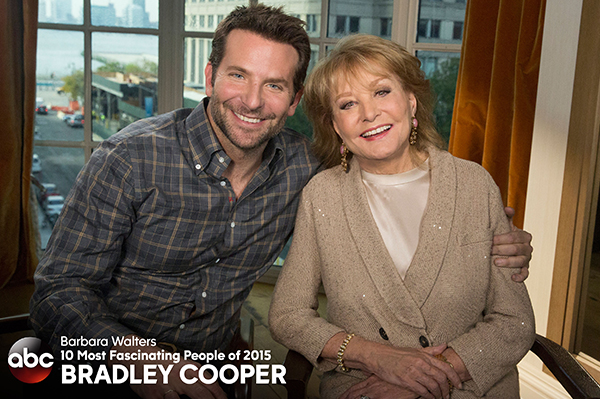 Nominated for four Oscars, Cooper has made himself into one of Hollywood's most critically-acclaimed leading men, starring in Clint Eastwood's harrowing American Sniper, and in director David O. Russell's Silver Linings Playbook and American Hustle. But Cooper took his acting talents to Broadway in 2015, receiving a Tony nomination for his lead role in The Elephant Man. Walters discussed Cooper's close relationship to his departed father and the actor's decision to stop drinking in his late twenties. 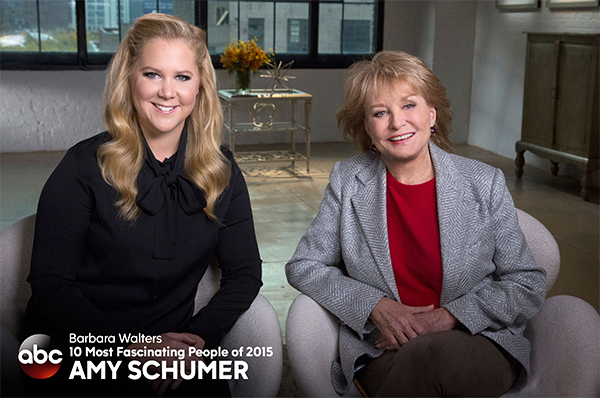 From her Emmy-winning sketch series Inside Amy Schumer to her starring role in Judd Apatow's Trainwreck and a new standup special on HBO, Schumer was a mighty comedic force across all media in 2015. But Schumer was also a serious role model as well in 2015, when she spoke out against gun violence after a gunman opened fire during a screening of Trainwreck in Louisiana in July.

"She's so hot this year, she really is," Walters said. "She's funny, she's smart and has not had the easiest life at all." 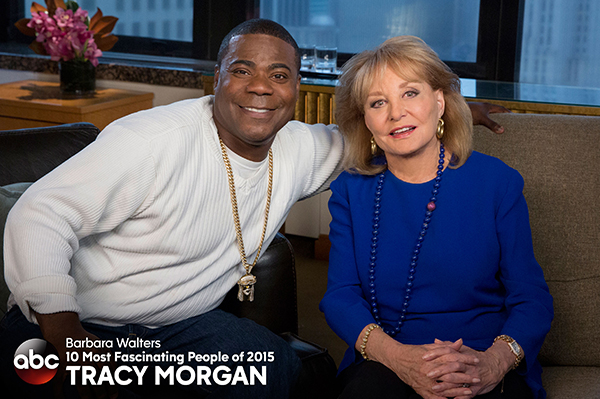 He's been making audiences laugh for decades, but Tracy Morgan has been the center of media attention this year for a much more serious reason. In 2014, Morgan was with three passengers when their car was struck by a Walmart tractor-trailer, killing one of Morgan's friends. In 2015, the comedian faced extensive therapy and rehabilitation and finally made his long-awaited comeback when he hosted Saturday Night Live this October. Morgan triumphed over tragedy and showed audiences around the world he could still make people laugh.

"You can see the scars from this terrible accident that he had where he was not supposed to live, and he's not only living but he's thriving," Walters said. 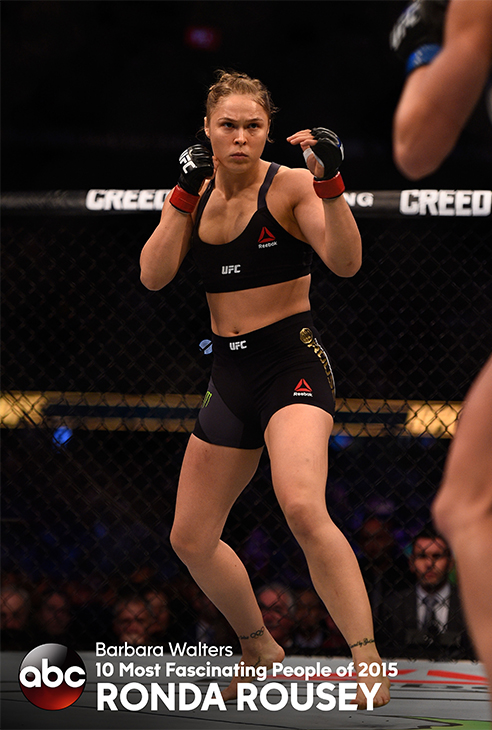 Named by Sports Illustrated as the most dominant athlete alive, Ronda Rousey was one of the most popular athletes in 2015 while serving as a positive role model to young girls everywhere. But Rousey saw her undefeated UFC streak come to an end in November after losing to contender Holly Holm. Still, the world is closely watching how Rousey will handle her next bout and if she'll come out on top. 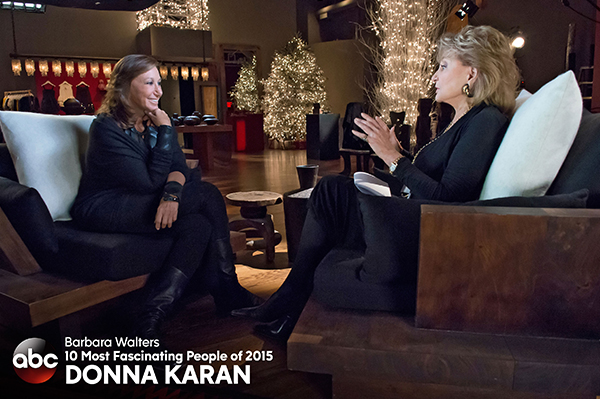 Known as the DK in the global fashion brand DKNY, the fashion designer and mom shocked the world in June when she announced her departure from the iconic label after 31 years to focus more time on her Urban Zen organization, a luxury lifestyle company that partners with artisans around the world. The 67-year-old Karan talked with Walters about her desires to not be a working mom, and her decision to leave her other companies to focus on Urban Zen.

"Since Urban Zen was my baby, it really needed my attention and really to grow it to realize the vision that I had for the company," Karan told Walters. 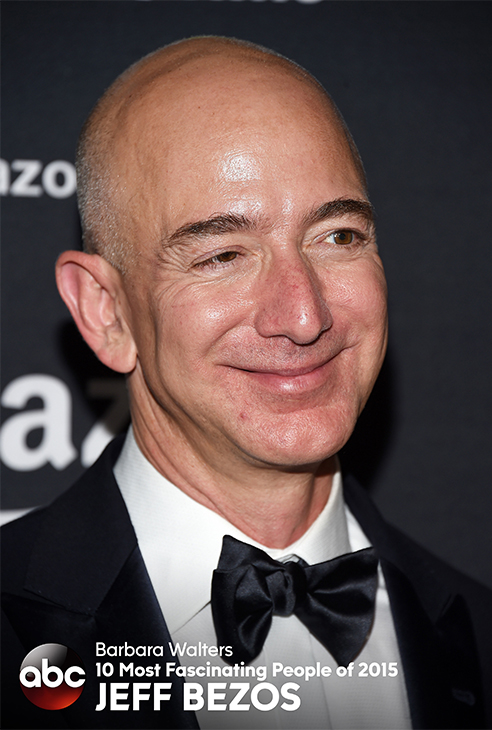 Jeff Bezos' Amazon.com has revolutionized both the way consumers purchase and receive items online. And with Amazon now the eighth largest retail business on the planet and even pursuing explorations into spaceflight, Bezos was a big presence in 2015, both online and in the real world. 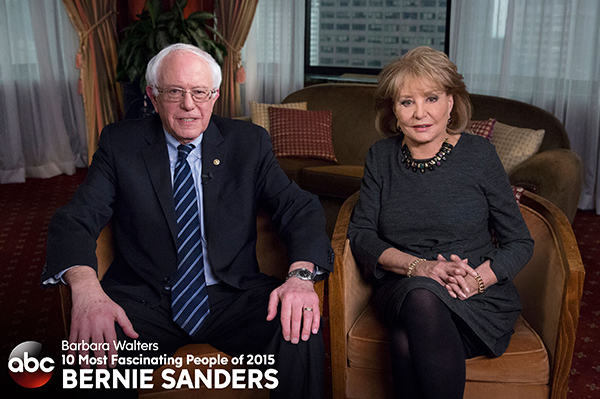 The energetic and enthusiastic 74-year-old is one of the front-runners for the Democratic nomination for the U.S. presidency. Whether or not Sanders finds his way to the White House in 2016 still remains to be seen, but with thousands of supporters turning up to his rallies and his campaign claiming to have received over 1 million donations, Sanders was a big political leader in 2015.

Walters asked Sanders about his election and if the candidate thinks it'll be a waste of time if he doesn't win. "I'm feeling confident we're going to pull off a major political upset and win this," Sanders said. "This is a great country, we have great people and I so much enjoyed the opportunity to be part of that process. So no, to me, I think we are going to win, but I think if by some chance we don't, it has been a great experience." 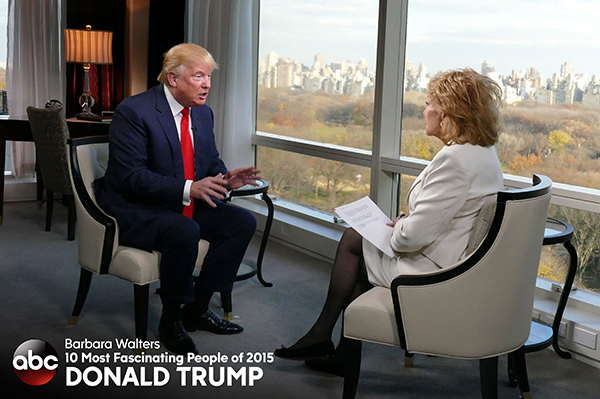 He's the most talked about person in the 2016 election, drawing in huge crowds at rallies while being criticized for his often controversial comments, including a call to ban Muslims from entering the U.S. after the San Bernardino shootings. But regardless of what you may think of him, it's hard to deny that Donald Trump was a powerful force in 2015.
Related topics:
societybernie sandersballetamy schumerpoliticsdonald trumpdistractionamazonentertainmentbuzzworthytracy morganpresidential raceabc newsabcfashiontrendingufc
Copyright © 2022 WABC-TV. All Rights Reserved.
TOP STORIES
Woman walking with baby stroller shot to death in Manhattan
Mother, half-brother facing murder charges in 7-year-old girl's death
R. Kelly sentenced to 30 years on sex trafficking conviction
Prayer vigil held in support of detained WNBA star Brittney Griner
Man snaps pic of vintage Burger King walled-off inside Delaware mall
NY State Legislature to pass new gun control bill
NYC's pandemic exodus ending; Rent prices could get even higher
Show More
Police search for man after 3 people found dead inside Queens home
7 On Your Side, congressman team up to save homeowner from foreclosure
AccuWeather: Very Warm
Couple allegedly ran sex trafficking ring on OnlyFans: DA
U.S. buys 105 million COVID vaccine doses for fall campaign
More TOP STORIES News