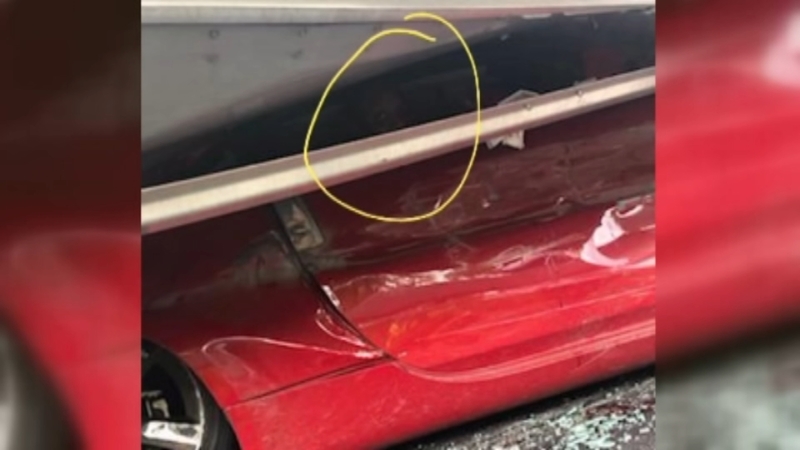 Driver trapped in crushed car under semi records his own rescue

WATERVLIET, New York -- A driver in New York who was crushed in his car by a 22-ton tractor trailer not only lived to tell about it, he joked with first responders and even recorded his own rescue.

And he said he remembers all of it.

"It was a flour truck, so there was flour and smoke from the engine bay pouring into the car. So I'm choking, gasping for air," said Jelani Reyes-Craig.

Through it all, Reyes-Craig, 28, remained calm.

He says once he managed to elbow a hole through the debris, the smoke cleared.

That's when he says he cut himself out of his seat belt and wiggled over to the passenger side to try to get some more space.

"I remember hearing someone scream 'Don't go under the truck!' and these two gentlemen didn't care, they went grabbed the jaws of life and came under the truck to come get me," he told WTEN-TV.

One of those gentlemen was Lieutenant Jim Strock with the Watervliet Fire Department.

He said he pulled up to the wreck, bracing himself and his crew for the worst.

"Survivability rate on this is zero. No way is this guy alive. And they said he's talking, I said 'Get out of here.' I go around the car and I yell in 'Hey bud.' He goes 'Dude, would you take my picture, this is unbelievable.' And I'm like - I wasn't expecting him to be alive, first of all. Second of all, he's kind of making a joke of it," said Lt. Strock.

While there was some initial shock, Reyes-Craig was somehow not only alive, but barely injured.

And while he waited patiently for the firefighters to free him, he pulled out his phone and started recording the incredible rescue.

He also made one important phone call to his girlfriend, Kaylea.

Kaylea says she immediately left work and drove to the scene.

"It was one of the scariest moments ever. They had me stopped and they were like 'They're trying to get him out of the car now. He's a lucky man'," she said.

You can say that again.

WTEN-TV cameras were rolling when Reyes-Craig miraculously walked away from that wreck with just a cut to his hand and a couple of missing teeth.

"He walks out of the car and he's high-fiving us on the way to the hospital. Unbelievable, unbelievable," said Lt. Strock.