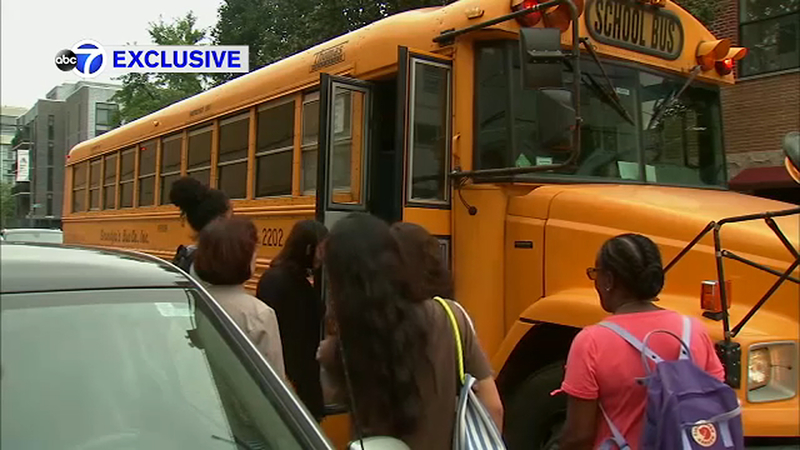 LONG ISLAND CITY, Queens (WABC) -- In an Eyewitness News exclusive, parents say drivers at a school bus company in Queens have had a number of problems, including getting lost, going the wrong way on a one way street, and not having children fasten their seat belts.

He was lost on his way to class because, he said, "I had to direct the bus driver."
He said his bus driver didn't know the route, and Avik's mother said that's not all.

"He had to tell her she had to make a U-turn because she was lost, she was going up a do not enter," said Anjali Joshi.

In fact several parents at PS 384Q in Long Island City exclusively tell Eyewitness News that this is just the beginning.

Parents say another District 30 school bus in Jackson Heights went the wrong way down a one way street. A parent can be seen in the corner backing the driver out after chasing him down heading into traffic.

Parents also say a bus driver in Long Island City refused to instruct kids to buckle up, or help them. "Expecting a 5-year-old who never rode the bus to know how to buckle the seat belt is outrageous," said parent Andy Chung.

And parents say this is all in addition to skipping several stops on day one. "Kids were stranded at the bus stop," said parent Danielle Lee.

Then on day two: "I was furious. I was furious," said Chung, who said the bus never showed up at school to bring them home. "Coming home was a horror show," he said.

There's also a color code system so drivers know where students need to be dropped off.

But on Wednesday afternoon, Chung said, "The driver didn't know the color code system so there was a kid left on the bus that was supposed to be dropped off at the previous stop and the nanny had to run over, kid crying, to pick her up."

A spokesperson says the driver in Long Island City will be removed from the route immediately.

"On the first day that's a lot for a child to handle because on the second day he was definitely stressed," said Anjali Joshi. "I could tell he was a little stressed like, hey it's my responsibility to get these kids to school."

And Grandpas Bus Company says after reviewing the evidence, if the driver who went the wrong way in Jackson Heights is found involved in wrongdoing, he will be removed as well.

"Grandpas Bus Co wants to take this opportunity to sincerely apologize for the issues during these first few days of service. We can assure the parents these problems are being rectified and addressed as soon as they are received. The two drivers of the routes mentioned during this news story have been removed effective immediately and will have new professional drivers on them starting tomorrow morning. Grandpas has a zero tolerance policy for any lawbreaking and takes the safety of the children as it's number one priority.

There will be a driver-management meeting held at 5am tomorrow morning to go over the safety procedures and expectations Grandpas has of its employees when transporting children. This earliness will also ensure the drivers are out on the road at the right time to not miss any stops and all children will be picked up and transported to their respective schools. In addition, I will also be visiting with school officials in district 30 that we have had problems with to reiterate we have resolved the service situation and there is a plan in place for better service. We will gain back these schools trust with our plan and proven service as the days continue."

The city Department of Education also released a statement:

"We've worked with bus companies throughout the holiday weekend and have improved service, and are working diligently to fix any issues families may be experiencing. Safe and reliable transportation is our priority, and we will thoroughly investigate any allegation of misconduct."