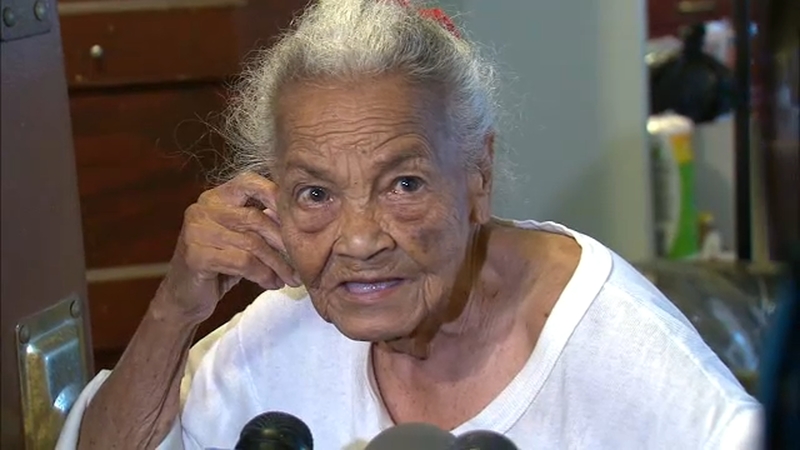 EAST VILLAGE, Manhattan (WABC) -- The NYPD is searching for the thieves who attacked an 88-year-old New York City woman and stole the cash she was saving to buy a headstone for her late husband.

Police said the men followed Maximina Osorio to her East Village apartment, barged into her home, grabbed her from behind and pushed her through the doorway to the ground.

One man then asked her, "Where's the money?" and Osorio directed them to a bedroom drawer. They took $5,000 in cash and ran off.

Candace McCowan reports on the robbery from the East Village.

This happened back on Saturday at 11:45 a.m. near East 10th Street and Avenue D. Osorio was taken to the hospital for neck and back pain but has since been released.

The 88-year-old had that large sum of cash because she was saving to buy a headstone for her deceased husband Salvatore, who away two years ago.

After hearing about the robbery, the owners of a monument company in Linden, New Jersey are giving Osorio a granite marker for Salvatore -- at no cost.

The family-run business, which wishes to remain anonymous, said they simply wanted to help somebody who was working hard to provide something for a loved one.

The couple had been married for 50 years. Salvador, a cabinet maker from Puerto Rico, died in December of 2017.

One of the robbers was described as a 5-foot-8 Hispanic man with a light complexion who weighs 160 pounds and has a full beard. He was last seen wearing blue jeans, a blue hoodie, a blue T-shirt, white sneakers, a backpack, and a black-and-blue Philadelphia Flyers baseball cap.