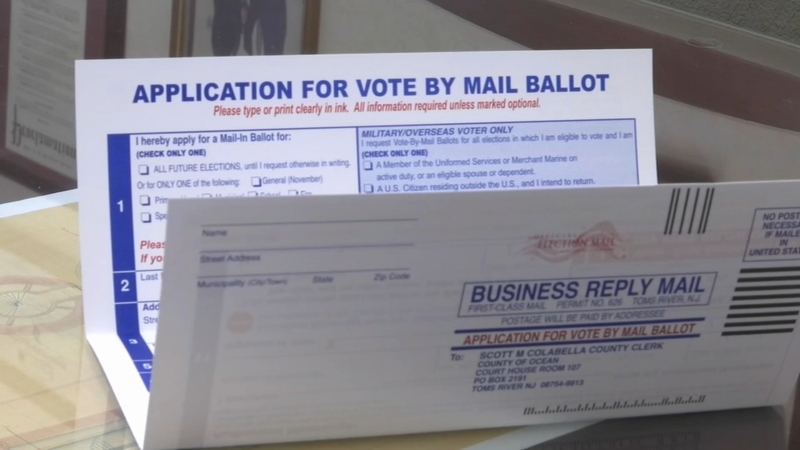 BRICK, New Jersey -- A New Jersey law that passed in August means that if you received a mail-in ballot in 2016, 2017 or 2018, you automatically received one this year unless you opted out.

Several counties we checked in with have issued thousands more mail-in ballots this year than they have compared to past years.

Some were not expecting to receive a mail-in ballot this year, even though county officials say they sent informational letters to voters.

Dorothy Scott of Brick, New Jersey is filling out a last-minute mail-in ballot at the Ocean County Elections Office in Toms River, skipping the mail and handing it right over to a board of elections worker stationed across the hall.

Scott voted by mail in 2018, and because she didn't opt-out of future mail-in ballots, she's voting by mail again this year.

"For me to go to the same place and vote every single time and use this as an exception was always my idea. And then when the letter came if I didn't open it, where would I be tomorrow?" said Scott.

Ocean County Clerk Scott Colabella says there have been a lot of questions about the new law.

"As you can imagine there's confusion. Voters are getting ballots in the mail that they didn't request," he said.

Colabella says more than 40,000 mail-in ballots have been issued for this year's election.

For comparison, Colabella says, "The last time the state assembly was at the top of the ticket in 2015, we issued a little over 14,000 ballots. So more than double the amount of ballots that have gone to voters."

And people are filling them out, he says. About half of those 40,000 mail-in ballots have been returned.

But what if you received a mail-in ballot, and you still want to go to your polling place? You still can, with a caveat.

"They're not going to allow you into the voting machine, because you've received a vote by mail ballot. But they will offer you a provisional ballot," said Colabella, assuring voters that they will be able to cast a ballot.

If you want to opt-out of receiving mail-in ballots for future elections, you can fill out a form with your county.