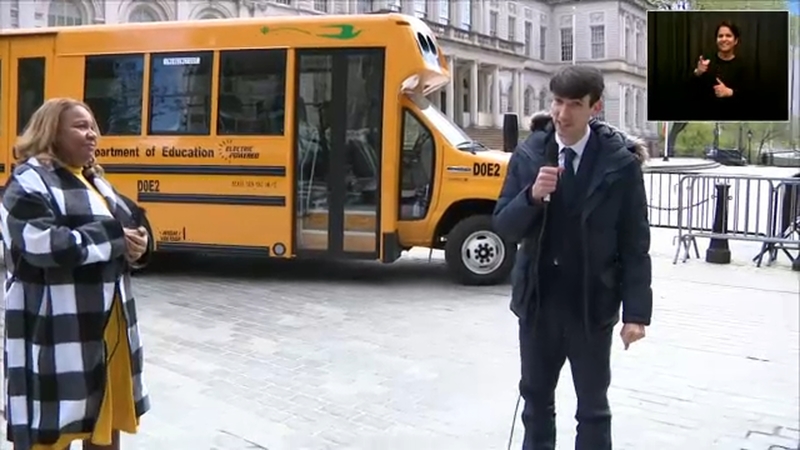 The mayor unveiled the city's first electric school bus, which goes into service Monday, with the goal that 100% of New York City's school bus fleet will electric by 2035.

"When we talk about a green future for this city, we all need to be a part of it," de Blasio said.

The mayor said that the city is building upon its goal of having a 100% electric city fleet by 2040, with buses leading the way.
EMBED More News Videos

The city aims to have all school buses electric by 2035.

The city expects 75 electric school buses to hit city streets in the next two years.

"This is such an important investment in New York City," Schools Chancellor Meisha Porter said. "In public schools, families and our communities."

In Paterson, officials launched a three-day citywide cleanup, with volunteers sprucing up city streets and parks.

The mayor also announced new legislation in the works that would require all new parking lots and garages to have charging stations for one in every five spots.

The city announced the expansion of its on-street car share program, putting short term hourly or daily rentals through a smartphone app in underserved neighborhoods. There will be designated spots for on-street parking or in municipal lots, previously only available in private garages and more affluent areas.

The statistics show carshares have cut down on millions of miles driven over the last two years, therefore also cutting down on yearly emissions.

New York City is also resurrecting its curbside composting services after it was cut from last year's budget.

Collection services will begin in October. It will be opt-in, at least for now, with enrollment starting in August.

In Paterson, officials launched a three-day citywide cleanup, with volunteers sprucing up city streets and parks.

"Our children deserve to live in a world free from climate change, and we must do everything in our power to give them hope and stop climate change in its tracks," de Blasio said. "That means taking on some of the biggest polluting corporations for false advertising and greenwashing, in direct violation of our Consumer Protection Laws. My Earth Day message to Big Oil: See you in court."
The lawsuit seeks relief to stop the defendants from engaging the deceptive practices alleged in the complaint and to recover civil penalties for every violation of New York City's Consumer Protection Law.