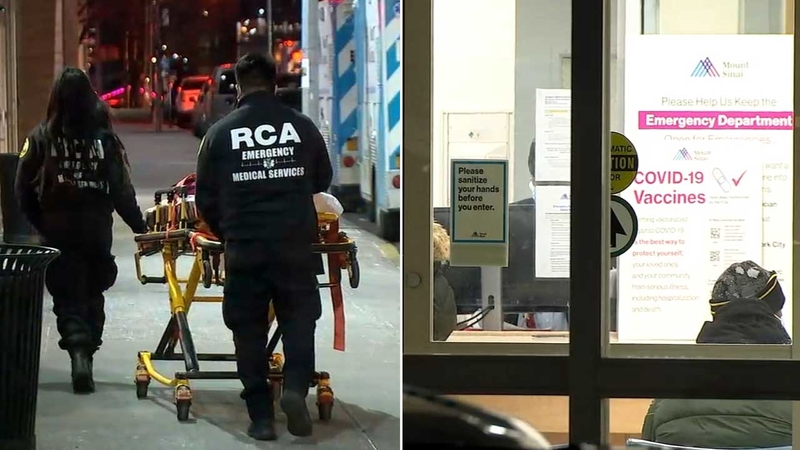 The mayor announced a three-point plan to ensure the City's hospitals have the resources they need.

The funds were made possible through a public-private partnership with Goldman Sachs.

Adams said part of the money would be coming from FEMA from money that had been returned by other states.

"When I was in Washington, DC several weeks ago I learned that a large sum of resources are being returned to the federal government from various states because they're not drawing down the money fast enough. We are not going to allow that to happen," Adams said. "We're going to make sure that we use those dollars. We're sending nothing back to Washington, DC."

Adams said much of the money would go towards ensuring that hospitals are properly staffed.

Finally, Adams said his administration would focus on expanding staffing and support at the Department of Health and Mental Hygiene.

Hospitalizations continue to surge, now topping 10,000 statewide for the first time since May 2020 after 800 more people were admitted on Monday.

As for those surging hospital numbers, Governor Kathy Hochul is suggesting that cases where someone was admitted for another reason then later tested positive for COVID could be driving up the official totals.

ICU admissions remain lower than what they were at the peak of the pandemic.

Adams made the announcement on the same day he's defending some controversial remarks about what he called low-skill workers.

"My low-skill workers -- my cooks, my dishwashers, my messengers, my shoe shine people, those who work at Dunkin Donuts -- they don't have the academic skills to sit in the corner office," he had said while arguing for city offices to reopen. "They need this."

When asked about those comments Wednesday, Adams did not apologize.

"Listen, I was a cook, I was a dishwasher," he told CBS in an effort to clarify his comments. "When you talk about closing down our city, if you are a dishwasher, you can't remotely do your job. And if you don't have an accountant in an office space coming to a restaurant, then you're not going into that restaurant. That dishwasher is not going to have a job."

The mayor is calling on Manhattan's large employers to ditch work-from-home plans and get office workers back, pronto.

He's also pushing ahead with in-person schooling, despite reports that 26,680 students and staff have tested positive since the start of the holiday break.

"The safest place for a child is in school," Adams said. "Little Johnny's not in school. He's not in his room. He's in the streets. He doesn't have his mask on."

Kristin Thorne has the latest on mask effectiveness and what experts are recommending.