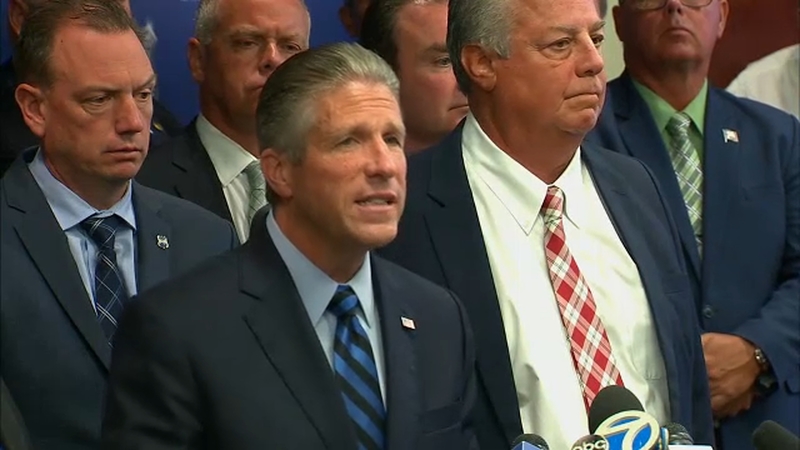 NEW YORK (WABC) -- New York City Police Commissioner James O'Neill announced Monday that he has fired the police officer involved in the 2014 death of Eric Garner, and reaction was swift on both sides.

"Police Commissioner O'Neill has made his choice: he has chosen politics and his own self-interest over the police officers he claims to lead. He has chosen to cringe in fear of the anti-police extremists, rather than standing up for New Yorkers who want a functioning police department, with cops who are empowered to protect them and their families. With this decision, Commissioner O'Neill has opened the door for politicians to dictate the outcome of every single NYPD disciplinary proceeding, without any regard for the facts of the case or police officers' due process rights. He will wake up tomorrow to discover that the cop-haters are still not satisfied, but it will be too late. The damage is already done. The NYPD will remain rudderless and frozen, and Commissioner O'Neill will never be able to bring it back. Now it is time for every police officer in this city to make their own choice. We are urging all New York City police officers to proceed with the utmost caution in this new reality, in which they may be deemed 'reckless' just for doing their job. We will uphold our oath, but we cannot and will not do so by needlessly jeopardizing our careers or personal safety."
---
New York City Mayor Bill de Blasio held a press conference, during which he said "justice was served."
EMBED More News Videos

De Blasio said he hopes the decision to fire Pantaleo "brings some small measure of closure" to the family of Eric Garner."

"The United States department of justice absent and unwilling to act even to come to any decision for five long years, but today, we have finally seen justice done," he said. "I felt the justice was served, that that was a fair and impartial process that yielded justice."

De Blasio also addressed the city's police force, telling them, "You made a choice of good and noble choice to serve others to protect others. You did it because you want to help people. That's why people join the NYPD. It is extremely demanding work. I know that, and I want all New Yorkers to know that. And to our officers, a simple statement: We need you. And we need you to build deeper trust with all the people you serve. Because that is not only the right thing to do. It is the best way to keep everyone safe. Officers and civilians alike."
---
Garner's mother, Gwen Carr, held a press conference attended by roughly 50 supporters to demand that all the officers who participated in the incident -- not just Pantaleo -- be fired.

"It's been five long years I've fought this fight," she said. "I'm not stopping this fight...New York is not safe with officers like them out there. "Pantaleo, (attorney) Stu London, you can go ahead and appeal. You lost a job, but I lost a son. You can get another job, maybe at Burger King."

"We are not here for a victory lap, this should of happened five years ago," said Rev. Foy said. "Let's be real and clear, both the Obama Administration as well as the Trump Administration denied justice to the family for the death of Eric Garner...How low are our standards that we are expected to praise that he lost his job?"
---
The Rev. Al Sharpton held a news conference with Garner's children, saying the family was "relieved but not celebratory."
EMBED More News Videos

Reverend Al Sharpton reacts to the firing of NYPD officer Daniel Pantaleo for using a banned chokehold on Eric Garner.

"Pantaleo will go home a terminated man, but this family had to go to a funeral," Sharpton said.

She said she is urging lawmakers to make it a state and federal crime - not just an administrative violation - for any police officer to use a chokehold.

"I should not be here standing with my brother, fatherless," she said. "He's fired, but the fight is not over."
--

Attorney General Letitia James:
"For over five years, the Garner family and communities across the country have waited for justice in the death of Eric Garner. While we will never be able to change the events that transpired or bring Mr. Garner back, today, some semblance of justice is finally being served. In memory of Eric Garner and the countless others who have unjustly lost their lives, we will continue to fight for reforms to fix our broken criminal justice system and ensure that all of our communities feel safe.

In the wake of the death of Eric Garner, then-Public Advocate Letitia James led the charge for reforms to police accountability and criminal justice. She was the first elected official to call for the entire NYPD to be outfitted with police body-worn cameras. Following her repeated actions and a report issued by her office, the NYPD implemented a full force body-worn camera program. Additionally, she was the first elected official to call for the creation of a special prosecutor to be used in cases of police misconduct, which resulted in the Attorney General of New York being appointed to this role. She also filed a lawsuit to release the minutes of the Grand Jury proceeding to ensure full transparency."
---
New York City Civilian Complaint Review Board Chair Fred Davie:

"After five long years, Eric Garner's family, the City of New York, and a nation that long has had watchful eyes upon this case finally have closure.
Make no mistake: This process took entirely too long. And the tragic reality is that neither a verdict from a judge nor a decision by a police commissioner can reverse what happened on July 17, 2014. Officer Daniel Pantaleo's termination from the New York City Police Department does not make the death of Eric Garner any less harrowing. But it is heartening to know that some element of justice has been served.

Given the evidence the CCRB's prosecutors presented at trial, the Police Commissioner had no option but to dismiss Pantaleo from the Department. While July 17 is and always will be a somber day for the City of New York, today we can rest assured that Daniel Pantaleo will never patrol our streets again."
---