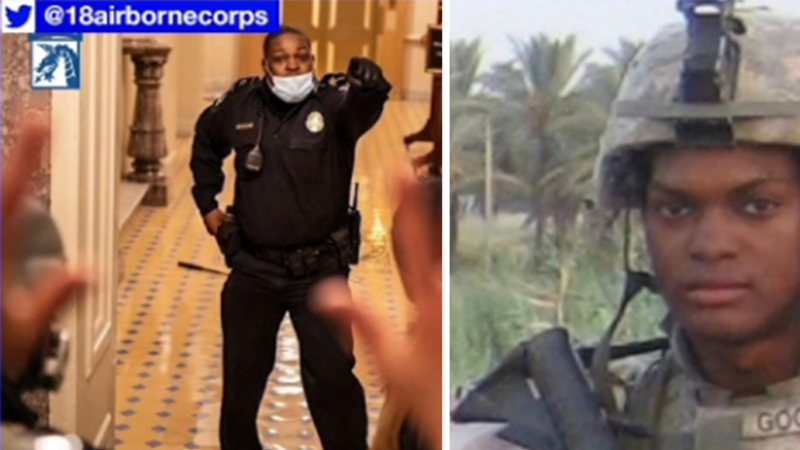 WASHINGTON -- Members of Congress introduced a bill Thursday to honor an officer for his bravery during last week's siege on the Capitol.

The bipartisan bill was introduced to award U.S. Capitol Police Officer Eugene Goodman with the Congressional Gold Medal for his bravery and quick thinking.

"He's a hero!" Congressman Crist said. "The United States Capitol was under attack by armed, violent extremists, and Officer Eugene Goodman was the only thing standing between the mob and the United States Senate."

Goodman was identified as the officer seen using himself as "bait," to lure rioters away from the entrance to the Senate chambers, where lawmakers were still debating an objection to Arizona's Electoral College vote count.

Capitol police officer Eugene Goodman is rightfully being hailed as a hero after singlehandedly holding back rioters from entering the Senate chambers last week.

An Iraq combat vet and member of this Corps, Eugene was a hero long before last Wednesday.

We celebrate his valor. pic.twitter.com/CLWlLG3bIW

Footage from Wednesday captured by Huffington Post reporter Igor Bobic shows Goodman, the sole officer among the mob, trying to beat the rioters back several times as he radios other officers, but they continue to trail Goodman up the stairs.

At one point, Goodman arrives at a landing and looks to a hallway to his left. A door in that hallway led to the Senate chambers, Wilson wrote in a tweet. Goodman then leads the rioters to the right, away from the Senate chambers -- and their "targets," Wilson said.

Goodman leads them into a larger hall, and backup officers arrive -- still outnumbered by rioters. Bobic stopped recording and was evacuated shortly afterward, he said.

Bobic said Goodman herded the rioters away from the Senate Chambers at 2:14 p.m. Senators were alerted that protesters had breached the Capitol building just one minute earlier, according to CNN's timeline of events from Wednesday's riot. Vice President Mike Pence wouldn't be evacuated from the Senate until 2:30 p.m.

The man in a hoodie seen chasing Goodman up the stairs, Doug Jensen, was arrested over the weekend for breaking into the Capitol and faces five federal charges -- of unlawfully entering the Capitol, disrupting government business, violent entry, parading in a Capitol building and blocking law enforcement during the riot.

"In moments of crisis, there are always individuals who rise to the occasion and put themselves in harm's way in defense of others. On January 6, 2021, one of those individuals was Officer Eugene Goodman," Congressman Cleaver said.