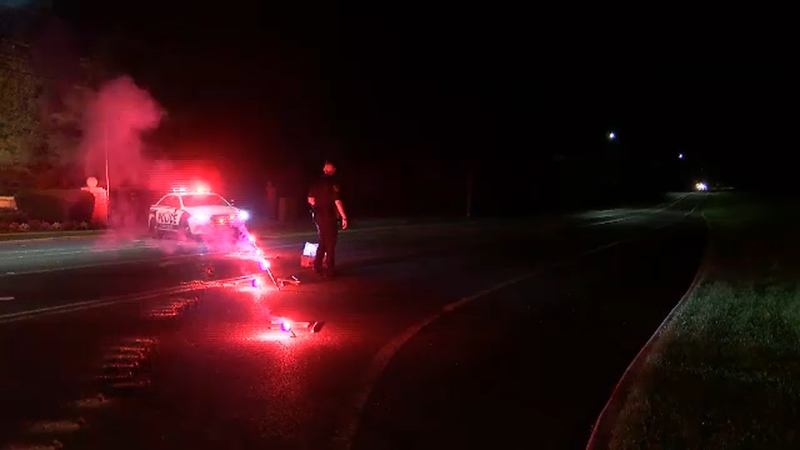 It happened as the SUV was traveling north on Mount Sinai-Coram Road, north of Hamlet Drive, in Mount Sinai around 11 p.m.

The SUV veered off the roadway and crashed into a utility pole, dropping live wires onto the vehicle that then sparked the fire.

The driver and two passengers in the SUV were pronounced dead at the scene.

Two of the women were identified as 23-year-old Dorien Lashea Brown, of Mount Sinai, and 24-year-old Rebecca Minunno, of Hampton Bays. The identity of the third woman is pending.

"I came outside and all I saw was a fireball," area resident Sal Moresco said. "There was nothing we could do about it."

People who live along the roadway said they could hear people inside the vehicle crying for help, but it was impossible to reach them.

"I saw the fire, and at that point, people started running the other way," witness Keith Pieloch said. "Because the pole started swinging, because it was arching."

Investigators are still trying to determine what led up to the crash, but they said there were no obvious signs of speeding, drugs, or alcohol.

"The fire department was like, 'Everybody stay back from the lines,' because they were afraid that the lines were going to fall," Moresco said.

Utility crews responded after the crash, causing several residents in the area to lose power.

The road was closed for the investigation.

"It's sad, you know, I heard they were kids," Pieloch said. "My prayers go out to the families...It's terrible."

Friend and former high school classmates of the victims showed up to place flowers at the scene.

The investigation is ongoing, and detectives are asking anyone with information on the crash to contact Crime Stoppers at 1-800-220-TIPS.