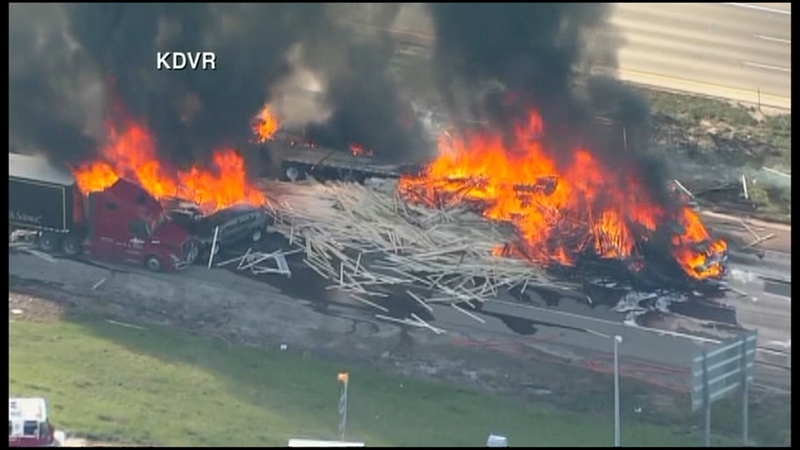 Multiple vehicles on fire on I-70 in Denver

DENVER -- A semi driver is in custody, facing suspicion of vehicular homicide after multiple people died in a fiery crash on Interstate 70 in Denver Thursday afternoon.

Initially Colorado officials said the crash involved 12 cars and three semis, but that number has since risen to a total of 28 vehicles.

One semi was carrying wood, one was a gravel hauler and the third was possibly carrying mattresses.

The crash investigation was just beginning Thursday night as fire and hotspots made it too dangerous for investigators to get into the scene, officials said. One firefighter sustained a minor injury from debris when something, possibly a tire, exploded, police said.

Police said an out of control tractor trailer in the eastbound lanes careened into stopped traffic at the Denver West Colorado Mills Parkway overpass, KMGH reported.

Traffic had been backed up due to a previous crash involving a jackknifed semi and a school bus about a mile ahead.

Investigators said they are looking at a YouTube video that captured images of a semi speeding past stopped cars just seconds before the collision. They said they believe that was the semi carrying wood, and that the driver survived.

The Colorado Department of Transportation closed both directions of the interstate and traffic is being diverted onto Colfax and 6th Avenue. Officials are concerned about heat damage to the pavement and a nearby overpass.

Officials say I-70 is not expected to reopen until tomorrow at the earliest. Motorists are urged to avoid the area now and especially during the morning commute.

Crews from multiple agencies are at the scene.