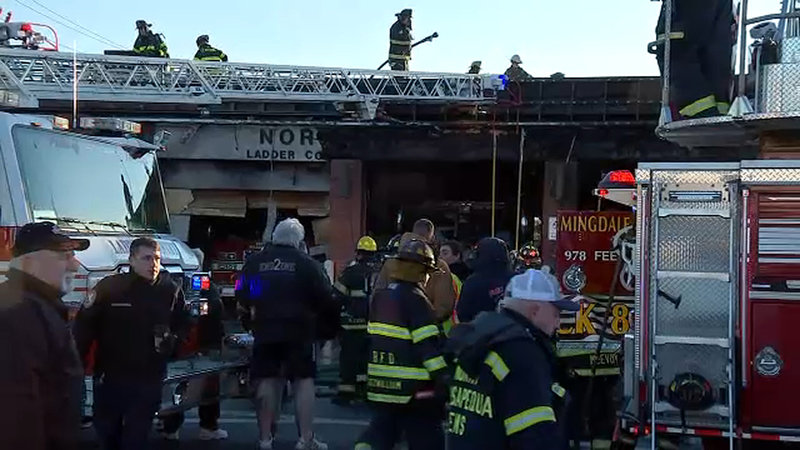 The fire broke out just before 6:15 a.m. at the North Massapequa firehouse on North Broadway.

Multiple fire departments from surrounding areas responded but the building was already engulfed in flames by the time they arrived.

Firefighters were unable to get three firetrucks - two engines and a tower ladder -- and other equipment out of the firehouse bays.

Firefighters did pull an ambulance from the flames. It was damaged.

The last place you’d expect such a devastating fire. Painful Christmas morning at the North Massapequa Fire Department. They lost 3 fire trucks & an ambulance in this blaze, but thankfully no one was seriously hurt.(Video courtesy: Jen Caccavale) #abc7ny @ABC7NY #NorthMassapequa pic.twitter.com/Bi9FMbVJua

No one was in the firehouse at the time and no injuries were reported. The cause of the blaze is under investigation. It is not believed to be suspicious.

The department's 120 volunteers were stunned by the loss.

"As I explained to my members, we'll overcome this. It's a shame," said Chief Joseph Pescale of the North Massapequa Fire Department. "This is what we do to help people everyday and it happens to us. "

The chief was one of the first to arrive, racing in to try to save all the apparatus. But there was a series of explosions, as residents came running out.

"It knocked me and another one of my members down," said Pescale. "At which point, we abandoned and waited until help arrived."

At least 25 other departments and well over 100 additional volunteers offered to help.

The chief said they have three vehicles left at their substation on Hicksville Road, where they will operate for now with mutual aid.

North Broadway was closed in both directions from North Poplar Street to North Syracuse Avenue for fire department operations.