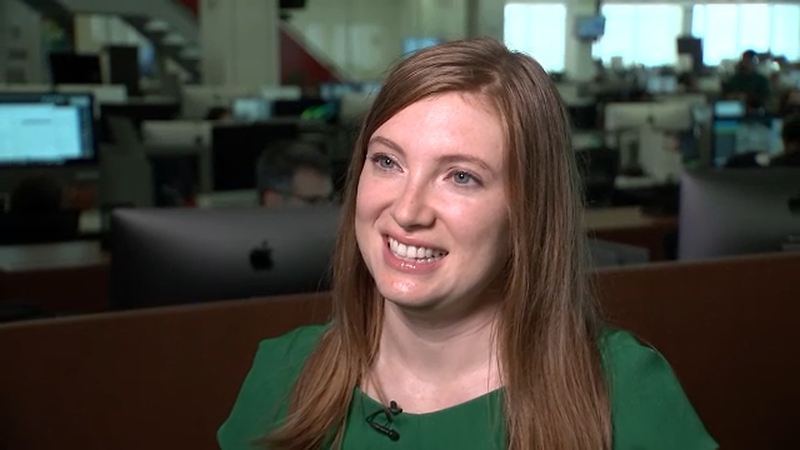 NEW YORK (WABC) -- Eyewitness News employs dozens of interns, and it's fair to say we couldn't get along as well without them.

The best often end up working here or elsewhere in TV.

Our former interns tend to stay in touch, and it gives me great satisfaction to learn about their progress -- but the achievements of one are so notable, she deserves her own update.

You may not know Theo Balcomb's name, but her podcast has become a sensation.

"This is the Daily." -- The opening sounds familiar to the two million people who listen to each episode.

"The Daily" has made host Michael Barbaro what one writer called "a breakout star," but behind each episode is a staff of more than a dozen people led by executive producer Theo Balcomb.

They all work for The New York Times, tucked away in a corner of the paper's vast newsroom.

"'The Daily' is a news show," Balcomb said. "It's a documentary. It's an explanation of one topic each day."

The audience is made-up of millions of millennials just like Balcomb.

"I made the show in part because I really wanted my friends and peers to listen to it," she said. "So we have just about two thirds of our audience is under 40."

Before she came to The New York Times, Balcomb was the youngest supervising producer in the long run of "All Things Considered" on National Public Radio.

Before that, she worked here at WABC-TV as an intern in 2008.

"Everybody there was so willing to help me learn and excited, I wanted to know what was going on there," she said. "And that experience kind of catapulted me into all the other things I would do to get where I am now."

At a time when journalism is under attack as "fake news," the work of Balcomb and her staff may be more important than ever -- and I am optimistic the profession is in good hands, especially when she describes her goal for each podcast.

"A story for us that is great is something that takes you to a place, that makes you feel something, that helps you understand the news, and brings you to a bigger thought," she said.

In a business of big egos, Balcomb stands out as a great collaborator who is quick to credit others for her own remarkable success. If I sound proud to have known her back when she was here, that's because I AM proud.