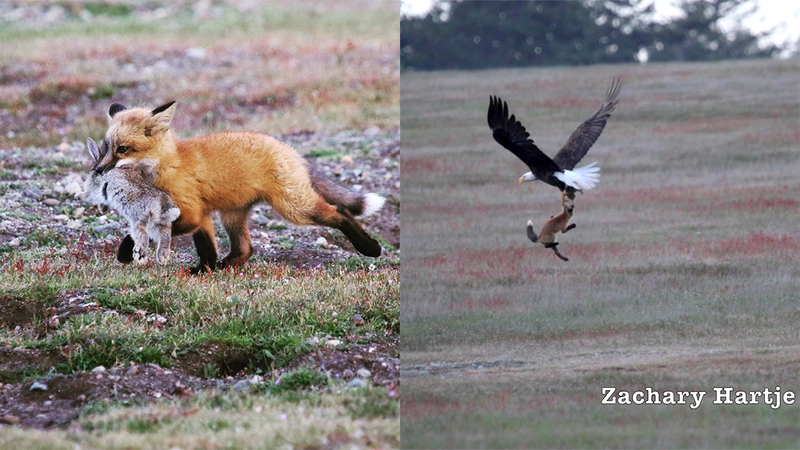 A fox who captured a rabbit quickly lost its prey when an eagle swooped in to try to steal the fox's meal.

The amazing sight was captured on video by Zachary Hartje at American Camp on San Juan Island, Washington.

Hartje's video shows a young fox roaming around with the rabbit in its mouth. Then, seemingly out of nowhere, an eagle swoops in to grab the rabbit, carrying the fox into the air.

Hartje estimates the fox was carried about 10 feet into the air and traveled more than 50 feet before it let go of the rabbit. The fox fell the the ground unharmed. He said the eagle did not fly away with the rabbit, but he's unsure whether the fox was able to recollect its meal.

"I was shocked and amazed," Hartje told ABC. "I have never seen this happen before, and no one else who I talked to there or on the Island has ever seen it happen before."
Report a correction or typo
Related topics:
pets & animalsrabbitbald eaglenaturefox
Copyright © 2022 WABC-TV. All Rights Reserved.
TOP STORIES
Police release photos of suspected gunman in Q train fatal shooting
3 women killed by alleged drunk driver after leaving Sweet 16 party
Boy Scout suffers minor injuries in bear attack at NY campsite
Last public pay phone in NYC removed from streets
Alleged scooter driver surrenders in stray bullet death of 11-year-old
Nurses, techs at NJ hospital stage strike over working conditions
15 arrested after NJ pop-up party that sparked 9 p.m. curfew
Show More
Man charged in execution style murder during motorcycle buy meeting
'American Idol' winner talks plans for the future
AccuWeather: Sun and clouds, breezy and cooler
Teen who drowned in NJ reservoir identified
Weekend storms in NY down trees, leave more than 1,000 in the dark
More TOP STORIES News