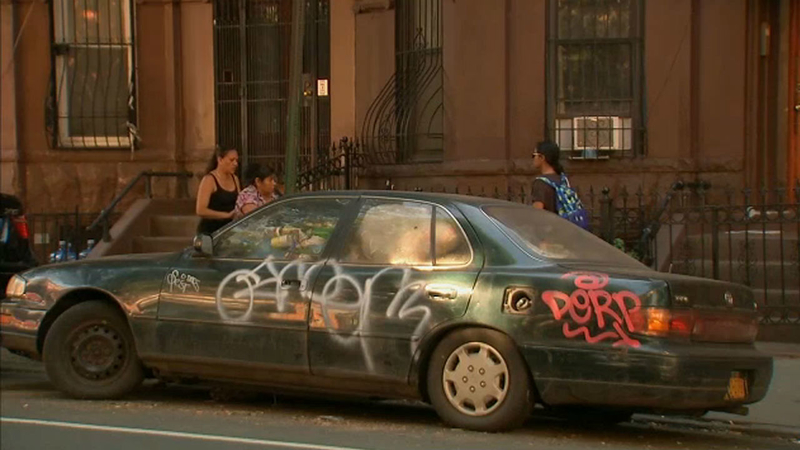 PARK SLOPE, Brooklyn (WABC) -- Residents in Brooklyn say a car filled with trash that was sitting in their neighborhood for days was driving them crazy.

"It's become like an exhibit, people gawking at it," said Park Slope resident Sean Redmond. "But the whole neighborhood is sick of this thing."

It's become known as "The Garbage Car." A 1993 Toyota Camry, covered with graffiti and loaded with junk, was parked on 6th Avenue in Park Slope, where it baked in the summer sun for at least six days, in one of Brooklyn's most desirable neighborhoods.

It's a nuisance and a mystery. No one knows what's buried deep inside it or who parked it there. Visible from the outside are countless bottles and cans, bags of household trash, a half-dozen aluminum crutches and a paperback copy of Anne Frank's diary.

Neighbors tell Eyewitness News they called every city agency they could think of, but because the car was legally registered and legally parked, there was nothing anybody could do about it.

"You used to see this kind of thing years ago," said one resident. "But the neighborhood has changed and we're not used to seeing this now."

"It's sort of a smell issue for me," said Buzz Freitag, who lives two doors away. "You could look at it as a work of art," he chuckled, "but hopefully just a temporary exhibit."

Officers from the local precinct say they made contact with the owner, a middle-aged woman, who promised to move it Monday.

When the car had not been moved by Tuesday evening, police closed the street and removed it. One officer explained that a vehicle cannot be parked in the same spot "for an extended period."

Neighbors were not sorry to see it go, even though they'll never really know what was inside.