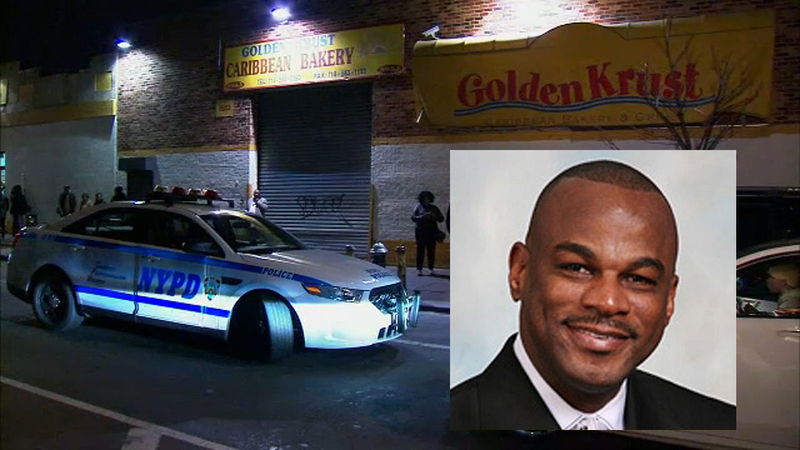 CLAREMONT, Bronx (WABC) -- The suicide of a successful local entrepreneur is causing shock and sadness both in New York and his native Jamaica.

Police confirmed 57-year-old Lowell Hawthorne, the founder and CEO of the Golden Krust bakery chain, shot himself in the head Saturday evening inside the company's Bronx factory.

"He was patriarch, a real businessman, a man of peace, a man of God," sister Jackie Hawthorne said, "That's what I want the world to remember who he was."

Lowell Hawthorne started the successful Caribbean fast food chain in 1989 by selling Jamaican beef patties, jerk chicken and breads. He built the business into a national franchise with more than 120 restaurants in nine states.

"It's fresh and unimaginable," director of marketing and public relations Steven Clarke said. "That is the best way for me to put it to you guys. Try to imagine something that you would have never imagined."

At company headquarters in Claremont Monday, there were hugs and kisses inside the corporate offices, while outside the warehouse, dedicated workers shipped and packed the beef patties that helped build an empire.

"It's completely out of character," chief marketing strategist Cliff Ruffins said. "I'm just stunned and shocked. I still haven't gotten over it."

"If you read the note, and I'm not going to read it, it is hand written by him," NYPD Chief of Detectives Robert Boyce said. "People in his family identify that it's his handwriting. It's about a legal side issue, where he pretty much states what is going on in his life."

Employees said they know nothing about claims of tax liens or failure to pay overtime to company workers. Instead, family, friends and workers talked about a man of integrity, a pillar of the community and a business visionary who created the largest Caribbean franchise chain in the country.

My condolences to the friends, family and employees of Jamaica-born Lowell Hawthorne, CEO of Golden Krust Caribbean Bakery & Grill.

He headed the largest Caribbean franchise chain in the US, with more than 120 stores. pic.twitter.com/PX9MpD2Mkg

Funeral arrangements have not been finalized.

"Lowell Hawthorne was a good friend, and was always ready to help my office whenever we needed him," tweeted Bronx Borough President Ruben Diaz, Jr. "He will be sorely missed. Our thoughts and prayers are with his family, friends and employees during this difficult time."