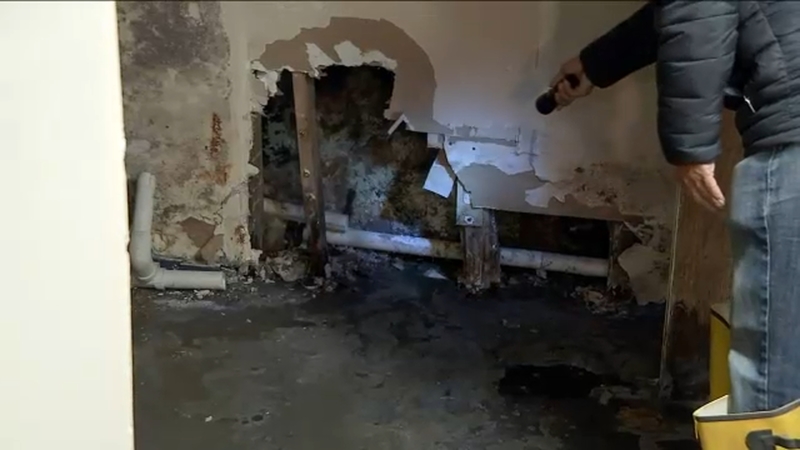 HILLSIDE, Queens (WABC) -- A homeowner in Queens has been stuck in a smelly situation for six months now.

Sewage has been seeping into his Hillside basement, and the problem is so bad, he says no one can live there.

To make matters worse, his calls to the city for help have gone unanswered.

"The waste liquid is penetrating into the foundation -- and this is the highest part basement," resident Patrick Kahn said. "And then it comes down here and it's even worse."

He says the sewage is coming from the car lot behind his building.

The Department of Buildings says it found PVC wastewater piping and a sump pump had been installed without permits and they don't comply with code.

The crew were amazed by what they saw.

"The Department of Health will be here... totally illegal,"

The property owner, listed as Sandra Halpern, couldn't be reached for comment, but a manager at Hillside Auto Outlet-that's the tenant- explained the situation.

"We rented a lot that had a bathroom and toilet, and this man is causing chaos when we offered to compensate for whatever he thinks he's being wronged for," the manager said. "He's not even being wronged. Well, there is sewage in his basement. I pay for sewage as well."

Kahn says the offer of compensation was just talk. He's facing thousands of dollars in repairs and lost income, because he can't rent out the property.

"I lost my tenant," he said. "I can't use the occupy or even lease or rent it. Financially, it's cost me a fortune."

However, the crew from the Department of Environmental Protection showing up is a positive sign for Khan. He hopes he won't have to wade in muck much longer.

A passenger was arrested for a mid-flight brawl aboard American Airlines 1357 from Miami to New York Sunday after she allegedly attacked a flight attendant.