Woman claims she was secretly filmed at New York hotel, then blackmailed 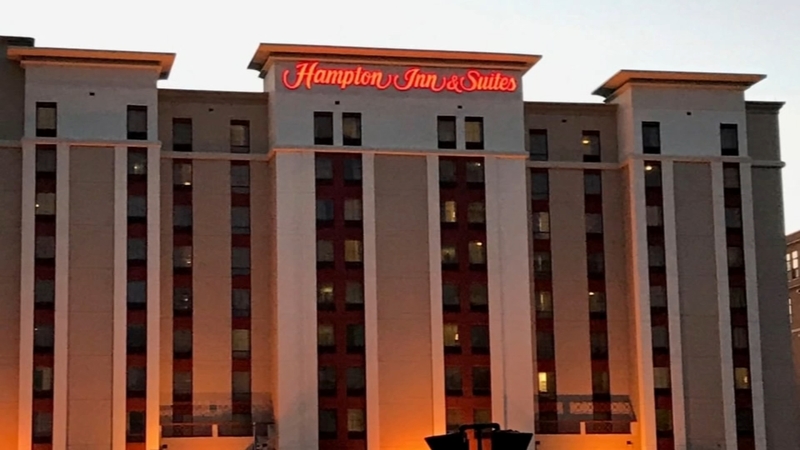 Woman claims she was spied on then blackmailed at a hotel

ALBANY, New York -- A woman who alleges that she was video recorded while taking a shower at a New York hotel and then blackmailed has filed a $100 million lawsuit.

The lawsuit, which does not identify the woman, claims that an unidentified employee had secretly recorded her at the Hilton's Hampton Inn & Suites in downtown Albany in 2015.

She did not realize she was recorded until September, when she received an email with a link to the shower video on an X-rated website with her full name in the video's title.

The message read: "This is you right?"

"All I could think is, 'My life is over,'" she said. "If this gets out, my life is absolutely over."

According to the complaint, the next day, the extorter threatened to post videos of her on other sites unless she sent a new private video in exchange. The message said: "You have until midnight to send me something good. Or I will post videos, your name, info everywhere. Then I send to people you know. You can enjoy being famous."

She alleges that when she did not respond, the extorter posted the video on more sites over the next few weeks and then created an email address using her name before emailing the video to her friends, family and colleagues. It included a message that read, in part, "Dear friends, I am trying to recruit some friends to help out a friend's art project (for which i got to be the model!) It's a little daring. Let me know what you think."

"It was just absolutely traumatizing because these are people I went to law school with," the woman said. "They're friends. They're coworkers. And they were sent a link to what looks like an email I sent."

The woman alleges the person then sent another email demanding she send thousands of dollars to a bitcoin address in exchange for pulling the video.

"You don't go into a hotel room and think something like this can happen to you, and it happened to me," she said. "If we can spare one more person from this happening to, that would make it worth it."

She also thinks that she might not be the only victim.

"We investigated extensively, kind of as far as we can go without Hilton's help at this point, and that investigation has revealed at least there is another victim," said Roland Christiansen, an attorney for the woman.

"The safety and security of our guests is our highest priority," a hotel spokesperson told ABC News. "We will continue to work with the authorities to discover the perpetrator and see that she/he is held accountable."

The hotel said it recently underwent a complete renovation and that during that process, no recording devices of any kind were uncovered.