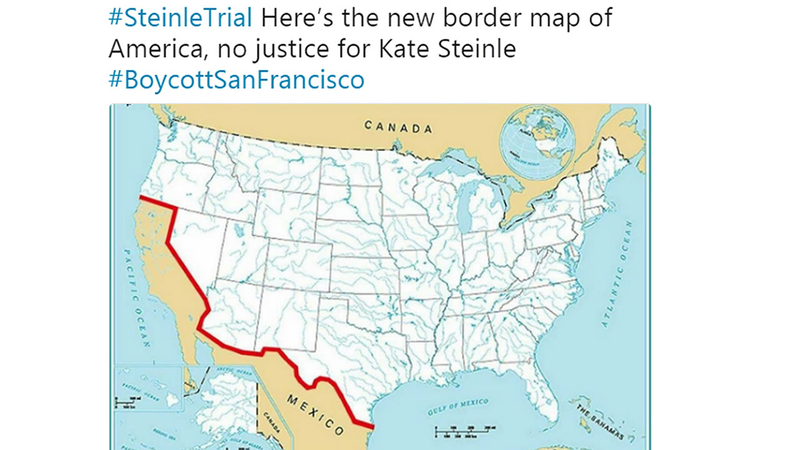 SAN FRANCISCO, California -- The internet caught fire after the surprise not guilty verdict in the Kate Steinle murder case. Emotions ran hot on Twitter with many users standing behind the a hashtag reading 'BoycottSanFrancisco' to voice their criticism and at times disgust.

Many of the tweets called for justice for the Steinle family:

#BoycottSanFrancisco
Never visit
Never go there
No justice for victims

MESSAGE SENT: If u go to San Francisco, illegal immigrants can gun u down, (even if they were deported a 100 times), & they will get off scot-free. #KateSteinle didn't know that. But NOW we all do. #BoycottSanFrancisco 🚫

While others took a more political angle, calling for the boycott of sanctuary cities:

No Justice For Kate Steinle and her Family #BoycottSanFrancisco #BoycottAllSanctuaryCities #NoDaca #BuildTheWall NOW!!! #Tucker This truly is a sad day for Justice.. pic.twitter.com/46jZEptyX0

Protect your citizens. #BuildTheWall
And consider building it around California too.

This Kate Steinle Verdict is sickening!#BoycottSanFrancisco

Mayors of sanctuary cities should be charged as accessories if illegals within their jurisdiction commit crimes. They have NO accountability. #NoJusticeForKate #NoJusticeForKateSteinle #BoycottSanFrancisco #BoycottCalifornia

It's the least we can do to right the travesty of San Francisco's #SanctuaryCity policy disaster.

My wife and I considered San Diego for our 30th wedding anniversary. I’ll take her to Iowa before we spend a dime in California pic.twitter.com/ksi13psaLF

A few tweets even argued that Trump's border wall should include California: