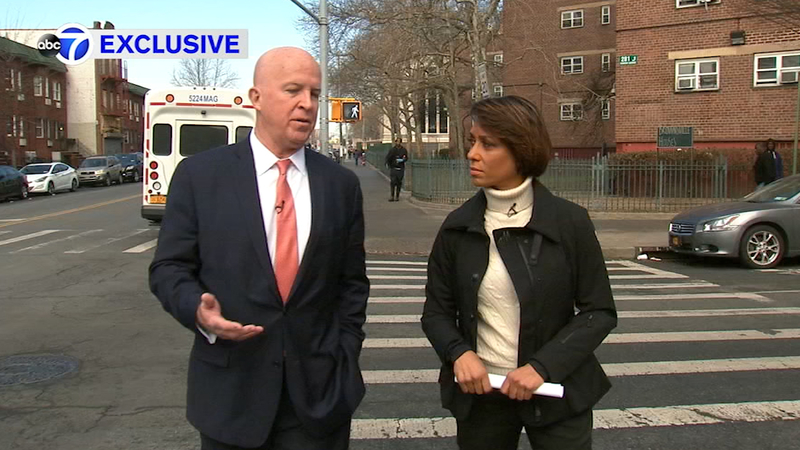 BROWNSVILLE, Brooklyn (WABC) -- A street in Brooklyn has been dubbed the most dangerous in all of New York City, and in an Eyewitness News exclusive, anchor Sade Baderinwa walked it with NYPD Commissioner James O'Neill.

The two discussed why there is so much crime in this one area of Brooklyn, and what is being done to make the neighborhood safer.

It is located at the intersection of Livonia and Rockaway avenues in Brownsville, with the four-block radius in between the Brownsville Houses the dividing line between two notorious gangs that have been at it for years.

Residents are demanding an end to what they call gang warfare, simply trying to live their lives amid unrelenting violence.

"This is the way it's been for a long time," O'Neill said. "It's one of the reasons we're focusing on the 73 (Precinct), because so much of the violence is gang-related."

The 73rd Precinct is one of six with violent crime rates more than twice as high as the rest of the city. And more than two years into his post as police commissioner, O'Neill admits he's hit a roadblock there.

"If you just look at Rockaway and Livonia, which is a block from here, since 2002, there's been over 70 shootings in that general vicinity," he said.

It's in these stubborn pockets of crime that O'Neill's new crime-solving approaches are needed the most. Along with normal policing, there's a new emphasis to reach out to communities in ways that foster dialogue and renewed trust to help eliminate problems that can only be solved together.

"We have a moral obligation that we cut down that violence," O'Neill said.

Crime has dropped dramatically in the past 25 years in New York City, even in Brownsville. But for residents -- and O'Neill -- it's not nearly enough.

A street in Brooklyn has been dubbed the most dangerous in all of New York City, and anchor Sade Baderinwa walked it with NYPD Commissioner James O'Neill.

"The numbers have gone way down," O'Neill said. "Still, compared to the rest of the city, it's more violent."

Even with those numbers, he doesn't believe the police department is failing the community.

"A lot of things have been done over the years, and I speak about this a lot," he said. "We're certainly not a perfect agency. We're not a perfect organization...We're moving forward. We're evolving."

O'Neill says the only way to curb the violence is by getting the community's help, but the NYPD's hope to foster a more meaningful relationship with residents isn't easy. There's a deep mistrust of cops after years of the discriminatory practice of stop and frisk. And further fueling the outrage are police encounters that ended in deadly force.

"I need to know they're on my side and not against me, and they're not going to do whatever they want just because they have a badge," one area resident said.

"It's something we work on every day," he said. "It's a process. That's why we changed the way we do business in each and every one of these precincts."

That includes arming 36,000 police officers with smart phones and email accounts so communities will have direct access to them.

A resident named James, who didn't want his last name used, has lived in Brownsville his entire life and says he's frustrated by the cycle of violence.

"People are scared to speak up because you know there's going to be repercussions," he said.

Still, James hasn't given up hope. And he says O'Neill's presence is reassuring.

"If he comes out here like he's doing today and he shows that he's trying to do something, I think the neighborhood will get behind him," he said. "Because most of the people in this neighborhood are good people."